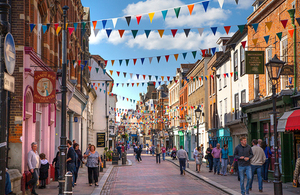 The Office for National Statistics (ONS) and Ordnance Survey (OS) have collaborated to identify high streets in Great Britain, what types of properties and businesses are on high streets as well as how the number of businesses and employment have changed in recent years.

2. Things you need to know about this release…

Introduction
The high street has long been central to the British retail experience. However, high streets are not just made up of shops. They also provide residential housing and offices for business as well as a range of local services, accommodation, and food and drink to residents and visitors alike.

The high street is also seen to be in a period of change. The closure of branches of retailers across many high streets has led to worries about the decline of retail on the high street, and in turn anxiety about how high streets will develop in the future.

In this context, it is important that good data on high streets are available to monitor the changes and inform policy responses. Therefore, the Office for National Statistics (ONS) and Ordnance Survey (OS) have joined together to identify high streets across Great Britain and to produce some initial analysis that investigates a range of data comparing the recent trends on the high street with those in non-high street areas.

In particular, this first article focuses on providing regional analysis to highlight some of the main high street trends. Based on the identification of almost 7,000 unique high streets across Great Britain, the article provides insights on the main different types of economic activity on the high street such as retail, food, and accommodation and offices. The article also examines data on population levels around high streets and information on the recent changes to residential housing on high streets.

It should be noted that this high streets project is very much a work in progress. The aim of this article, therefore, is to provide an introduction to the work, to provide some initial results, and to seek feedback to inform the next stages of the project. While the data come from a range of suppliers, including official statistics sources, the fact that the approach to this work is still being developed means that the data and results in this article are Experimental Statistics.

Looking ahead, our aims at the ONS and OS include further developing the high street geography to enable it to be widely used across government as a means for assessing high street topics, and also to expand on the initial results in this article with further articles to provide more detailed breakdowns of the data including at more local geographic levels.

The high street geography
The ONS has been working with the national mapping agency OS to locate, for the first time, where high streets are “on the map” for the whole of Great Britain. Given that no definition of high streets currently exists, OS has created an experimental dataset, using an automated methodology, which aims to depict the extent of Britain’s high streets and their land use.

The dataset is a high street-specific dataset that provides a street-level definition. It bounds retail clusters using street naming and aims to deliberately exclude other retail functions like retail parks, industrial estates, and isolated shopping centres. To be included in the dataset, a high street must be a named street predominately consisting of retailing, defined by a cluster of 15 or more retail addresses within 150 metres.

The high street extents and data are experimental and only a first step towards a more complete definition. We also plan to match more statistics from a wider range of sources in future, but we are keen to publish early findings to help inform the public and policy discussion about high streets.

It is important to note that we are only looking at today’s geographic extents and that the high street may have expanded or contracted in terms of its physical size over time. Some of the more striking figures in this article are also likely to indicate changing shopping patterns and we hope to explore this, as well as how high street extents have changed physically, in future research that will also bring in retail centres and destination shopping.

Technical information about the work can be found towards the end of this article in Section 8. Within Section 7 there is a link to an interactive map showing the location of high streets captured in the OS methodology. You can put a postcode or place name in the search box and see how your high street compares with others. If you click on an individual street you can see more information, like address types, or number of buildings….