IHBC’s ‘Heritage from the (business) doorstep’: Historic building that exported lace around the world restored to its former glory 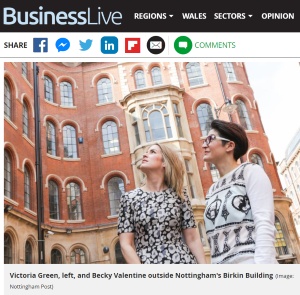 BusinessLive celebrated the restoration of the Birkin Building in Nottingham’s Lace Market, restoring one of Nottingham’s most cherished Victorian buildings, one designed by Thomas Chamber Hine for the Birkin family in 1855.

From here, lace was exported around the world. The lace barons, together with the Adams family, built huge warehouses in an area which became known as the Lace Market. Where once lace was stored and finished for customers from around the world, smart offices for the 21st century have been created within the original distinctive architecture. Nearly 165 years old, the Birkin Building was bought by Mich Stevenson in the early 1980s and is now managed by his daughters Becky Valentine and Victoria Green through the family business, Spenbeck. Above the impressive entrance where the Birkins would alight from horse-drawn vehicles – a step for the purpose remains – is the Bee symbol of the family, their initials carved into the stone alongside those of T.C Wine and the builder.

Like their father, Beck and Victoria love the building, 8/12 Broadway, an early example of town planning. Their property ownership extends west along Broadway to St Mary’s Gate where they own further buildings. The Birkin Building’s 30,000 square feet are fully let, every floor refurbished at a total cost of more than £500,000. The company received a  £50,000 grant  from Historic England’s Heritage Action Zone fund, the first award of the maximum figure in the country, said Becky who is chief operating officer. Becky and Victoria, chief executive, are proud of the careful cleaning and restoration of the stone and brickwork….

Some tenants have moved offices within the Spenbeck ownership…

The architecture reflected the prosperity of Birkin and the company’s international importance around the world. The warehouse was built by Richard Birkin, at various times Mayor of Nottingham, whose younger son, Thomas, became the first baronet. ‘Enquiries, sales room and distribution worldwide went from  the Birkin Building…

Beneath the lace warehouse are the remains of a medieval brewery in the caves currently accessible only by two sets of ladders. Becky and Victoria would like to find a way of bringing them back into a use. So what next? ‘Nos 2/6 Broadway need love and attention and the buildings on St Mary’s Gate,’ said Victoria. ‘But Birkin feels as though it is happy again. When the lights are on in the evening, it looks stunning.’