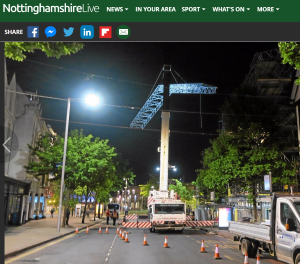 Dramatic pictures show the moment a huge temporary framework was added to one of Nottingham’s most beautiful historic buildings, Bromley House – the city’s oldest subscription library – all in the dead of the night, reports Nottinghamshire Live.

Bromley House, the city’s oldest subscription library in Angel Row, is undergoing repairs to its roof after reports of leaks and structural problems. Contractors were seen building sections of the temporary structure before they were lifted by crane onto the roof of the library, guided into place and then bolted down. Nigel Lowey, a trustee of Bromley House, was able to capture dramatic pictures showing the process, which happened around midnight … (on June 2). The road had to be closed as part of the process. The work on the roof is being funded by a grant of more than £385,000 from Historic England. The Georgian townhouse, which dates back to 1752, was recently added to Historic England’s ‘At Risk’ register, due to its architectural importance and fears of degradation.

The library itself, considered ‘secret’ due to its hidden location and unremarkable entrance door on a shopping street, was established in 1816 and has 1,700 members.  It stocks 50,000 books, some dating back centuries, and is acquiring an extra 1,000 books annually. Library director Melanie Duffill-Jeffs said previously: ‘The project to replace the roof has been worked on for so long, so it’s fantastic for the building and for Nottingham. It’s such an important building to protect. This is a huge moment in our history. After many years of struggling by with leaks and structural problems, we can finally secure the future of the library.’