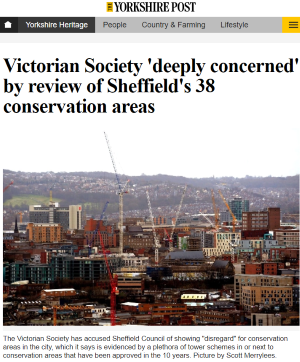 The Yorkshire Post has reported on how the Victorian Society has accused Sheffield Council of showing ‘disregard’ for conservation areas in the city’, which it says is evidenced by a plethora of tower schemes in or next to conservation areas that have been approved in the 10 years.

A Yorkshire council has promised that it is striving to balance the need for new development with protecting its city’s unique heritage, after being accused of showing ‘blatant disregard’ to its historic fabric.

Sheffield Council said it had held talks with heritage campaigners following concerns voiced in response to the authority’s planned review of the city’s 38 conservation areas.

According to the council, the review intends to ensure that Sheffield’s conservation areas ‘remain fit for purpose’ to deliver on their original objectives and not acting as a brake on development, but the Victorian Society said the review is ‘deeply concerning’, saying it believed the council had already damaged the historic character of the city through a series of planning decisions in recent years. The council insisted it wanted to find the right way to ‘move forward’ for the good of the city.

Tom Taylor, conservation adviser for the Victorian Society, which is represented at meetings of the council’s Joined Up Heritage group, said: ‘The Society recognises the need for regeneration and economic development but strongly believe this can be secured without damaging the precious and finite historic environment.’ The society is critical of a planned 33 storey-block in the city’s proposed Castlegate conservation area next to the River Don, and the council’s recent decision to demolish the city’s coroner’s court building, built in 1913 by architect F.E.P Edwards. Castlegate is the oldest part of the city and is being revamped with £786,000 funding from the council.

The proposed boundary of the Castlegate conservation area goes around the court building intentionally, according to Mr Taylor, who added: ‘Conservation areas are ultimately designated to shield the unique architectural and historic fabric of a place from threats such as demolition and needless alteration…