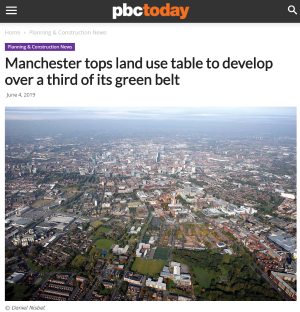 The Ministry for Housing, Communities and Local Government (MHCLG) has published detailed development breakdowns for Green Belts for 185 local authority areas for the first time. Analysis of the data reveals that 34.3% of Manchester’s Green Belt has already been developed. But nationally it is striking how little Green Belt development is due to housebuilding. In Manchester — which compares unfavourably with a national average of 8.4% Green Belt development — the proportion given over to residential is just 0.1%. A huge chunk of the city’s Green Belt (28.2%) is occupied by transport and utilities — more than double any other area.

To read the complete article go to the following link: