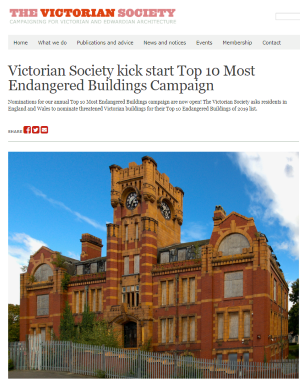 Our biggest push of the year to save the most at risk Victorian and Edwardian buildings is fast approaching. Our annual Top 10 Most Endangered Buildings campaign brings to the forefront the most dilapidated and neglected buildings around England and Wales that are in desperate need of public attention to be saved. This is a fantastic chance to get involved with the fight to save our heritage. To nominate a building simply email media@victoriansociety.org.uk with the year, location, and why the building deserves to be included in our campaign. Nominated buildings must be dated between 1837 and 1914, and situated in either England or Wales.

The predominant aim of our campaign is to bring forgotten buildings into the public sphere. The Victorian Society harnesses the media coverage the campaign gains to highlight buildings that would otherwise lie forgotten and decaying, and utilise this publicity to try and alter their fate for the better.

A light on the horizon for Norfolk’s dilapidated seaside winter gardens. The Grade II-listed Winter Gardens in Great Yarmouth featured in our Top 10 Endangered Buildings list last year. The majestic glass and iron structure is a fine example of the Victorian ability to bring architectural grandeur to a seaside town. This cathedral of glass faced an uncertain future – having been left empty for over a decade. A significant development occurred in March, when Great Yarmouth Council stated it is seeking an investor to restore the structure to its original purpose as a public place of enjoyment and recreation.

However not every building featured has a positive development. An irreplaceable part of Suffolk’s heritage, the Fison’s Factory, burnt to the ground in May. Featured in our 2017 campaign, the factory served as an example of Suffolk’s thriving industrial past. Fison’s left the site in 2003, and it had since fallen into a dilapidated state. It is crucial that derelict buildings are adequately secured to ensure destruction on this scale is prevented and our heritage protected.

The publicity gained through this campaign helps to drive overall public interest in retaining and protecting the Victorian and Edwardian buildings that are all around us. If you know of a building that is at risk from demolition, neglect, or inappropriate development, nominating it for our campaign provides a tangible path to saving it.

This is a fantastic chance to get involved with the fight to save our heritage. To nominate a building simply email media@victoriansociety.org.uk. Nominated buildings must be in England or Wales, and built between 1837 and 1914, and nominations must contain the building’s name/location, year it was built, brief description of its history and/or architecture, why you think it should be in the Top 10 i.e. the threat it is under, and at least one good photo. The deadline for nominations is Friday 19th July. It is not a voting system – there is no benefit to a building being nominated more than once. The final Top 10 list will be announced on Friday 13th September.