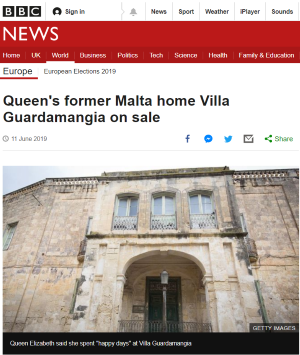 The Queen’s former Malta home, Villa Guardamangia, has been put up for sale for nearly €6m (£5.3m), reports the BBC.

The villa, located on the outskirts of the capital Valletta, is the only place outside the UK that Queen Elizabeth II has ever called home. She lived there between 1949 and 1951, in the early years of her marriage to Prince Philip, who had been stationed in Malta as a naval officer.

The Grade Two listed property has since fallen into disrepair. It is currently being listed by a luxury real estate agency, which describes it as ‘an amazing grand Palazzo style property… with documented great historical value.’ The listing says the 1,560 sq m (16,791 sq ft) property, which was built around 1900, boasts ‘many authentic architectural features’, high ceilings, stables and ‘various guest/servant quarters’. The property is just crying out for a great conversion and will make a superb residence or possibly a commercial venue,’ it adds.

The Queen and her husband lived in the villa before her coronation. It was at the time the rented home of Prince Philip’s uncle. She has fond memories of her time on the Mediterranean island, living as a naval officer’s wife. ‘Visiting Malta is always very special for me. I remember happy days here with Prince Phillip when we were first married,’ she said during a visit to the country in 2015.

Maltese Prime Minister Joseph Muscat gave the royal couple a framed watercolour of the property during the visit. But rows have broken out in Malta over the property in recent years, amid calls to restore the dilapidated building to its former glory. Some believe the government should acquire and renovate the villa, while others say private owners should decide what to do.