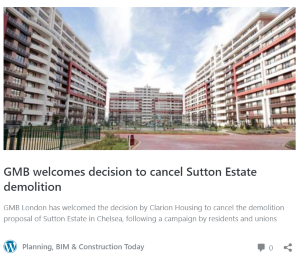 GMB London, part of one of Britain’s largest and fastest growing trade unions, has welcomed the decision by Clarion Housing to cancel the demolition proposal of Sutton Estate in Chelsea following a campaign by residents and unions.

Clarion Housing has cancelled the demolition of the estate and the destruction of the community housed in the affordable social homes on the William Sutton Estate in Chelsea. GMB campaigned against this development as a case of asset stripping and social cleansing in this wealthy borough.

A report from Inside Housing (4 May) has said Clarion has gone back on proposals to demolish 383 flats in the Sutton estate. The announcement comes six months after James Brokenshire rejected Clarion’s proposals to demolish the flats due to there being a significant loss of social housing.

Clarion has instead said that they intend to carry out improvements to most of the homes in the estate and bring the empty properties back into use.

Warren Kenny, GMB regional secretary, said: ‘GMB is very pleased with Clarion’s decision to cancel their proposals that would have led to the loss of nearly one-third of the social housing units on the William Sutton Estate in Chelsea…’

‘Clarion must not forget the primary reason of a housing association is to provide low-cost housing to those on low incomes or those who need extra support. Nor must it forget that the Sutton Dwellings Trust was founded to provide ‘model low-rented dwellings for occupation by the poor of London…’