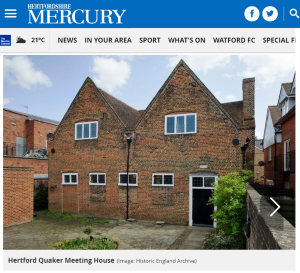 The Hertfordshire Mercury has celebrated the fact that the Hertford Quaker Meeting House – which first opened in 1670 – has been upgraded to Grade 1 Listing based on the building’s exceptional historical significance, as ‘earliest surviving purpose-built Quaker meeting house in the world’.

The Hertford Quaker Meeting House has been upgraded to a prestigious Grade I listing. The buildings’ exceptional historic significance has been recognised by the Department for Digital, Culture, Media and Sport (DCMS) on the advice of Historic England. Hertford’s Railway Street is home to the earliest surviving purpose-built Quaker meeting house in the world and it is still in Quaker use.

A Quaker preacher first came to the county town in 1655 and services were held in private houses until the decision was taken to build a permanent home in 1669. The meeting house opened in 1670. George Fox, the founder of the Religious Society of Friends, visited the building at least three times. There have been some alterations over the last 350 years, but overall it retains much of its original character. From the outside it has the appearance of a pair of houses, but inside is one large meeting room rising to the full-height of the building. The room is lined with timber panelling and rows of benches, while the roof is supported by a single oak column in the centre. Its exceptional significance means it has been upgraded to the highest level…

Councillor Peter Ruffles, a representative of the Hertford Bengeo ward, said: ‘To have a hugely merited new Grade I listed building in Hertford to join St Leonard’s Church is really good news. The Quaker building and its immediate environment were already well protected at Grade II, but the building itself is even more strongly both protected and distinguished now. Grade I means ‘national importance’ and all that follows from that.’

A total of 17 historic Quaker meeting houses across the country have been awarded Grade II, II* or I listed status. The listings are part of Historic England’s work to improve understanding, recording and protection of places of worship. A national survey of meeting houses still in use or in Quaker ownership was conducted to build up a detailed picture of these buildings, including their origins, architectural features, and place in the community… Heritage Minister, Michael Ellis, said: ‘Britain’s buildings tell the story of our history and the people who shaped it. By listing the Quaker Meeting Houses, we are preserving important places of worship and celebrating their rich heritage.’

Duncan Wilson, Historic England’s Chief Executive, added: ‘Quaker meeting houses are precious pockets of calm in an otherwise hectic world, and I’m delighted to see their quiet simplicity celebrated through listing. They are a largely unsung group of fascinating and surprisingly varied buildings that reflect the history, attitudes and ethos of the Quaker movement…’