IHBC’s ‘IMHO’ spotlight on heritage and risk: Notre Dame shows ‘the unifying force of culture, Grenfell the corruption of government’ 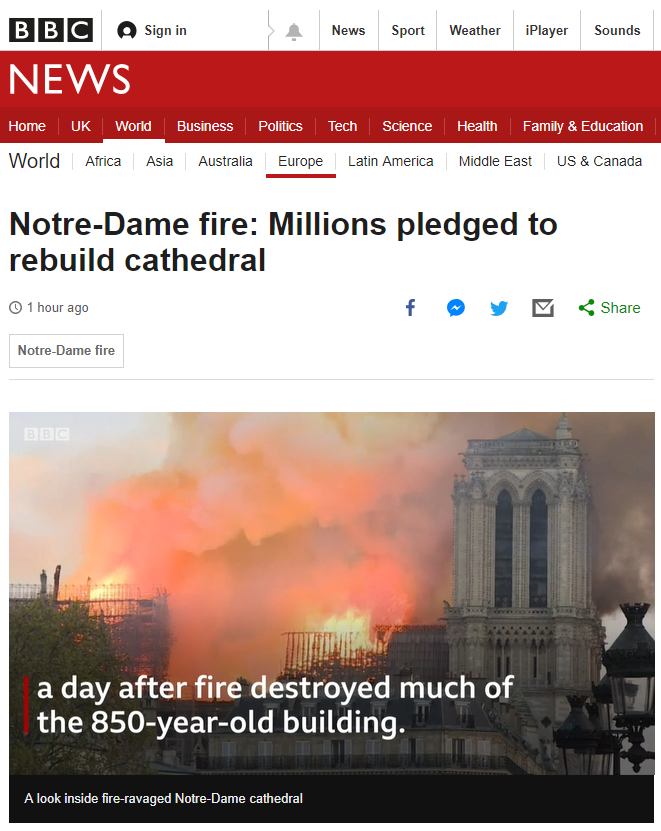 Julian Vigo – ‘scholar, film-maker and human rights consultant’- explores in Counterpunch a personal take on how, in the aftermath of the fire at Notre Dame, people began to highlight the alleged hypocrisy surrounding how the Parisian cathedral’s fire was publicly handled, and to ask ‘Where was the £600 million of donations within the first 24 hours for Grenfell?’.

‘What he loved above all else in the maternal edifice, that which aroused his soul, and made it open its poor wings, which it kept so miserably folded in its cavern, that which sometimes rendered him even happy, was the bells. He loved them, fondled them, talked to them, understood them. From the chime in the spire, over the intersection of the aisles and nave, to the great bell of the front, he cherished a tenderness for them all. The central spire and the two towers were to him as three great cages, whose birds, reared by himself, sang for him alone.’ —Victor Hugo, The Hunchback of Notre-Dame

In the aftermath of the fire at Notre Dame last week, I was not surprised to see people highlighting the alleged hypocrisy surrounding how the Parisian cathedral’s fire was publicly handled, asking, ‘[W]here was the £600 million of donations within the first 24 hours for Grenfell???’ Many, to include Katie Hopkins found the comparison bizarre, and as much as it pains me to say this, I rather agree with the critiques of the comparison. Moreover, these woke assertions which claim a connection between the two events ignore the problems that have plagued social housing in the UK long before the Grenfell tragedy while also using Notre Dame as a moment to purity posture about one’s wokeness. In short, these critiques serve no purpose to better the discussion around poverty and social housing which ought to be the focus of discussion, not which tragedy raised more funds.

For instance, many people hold that a historical monument’s burning is not as important as the Grenfell fire because human life was not harmed. Obviously, the loss of 72 lives in the summer of 2017 is far more tragic than an 850-year-old old cathedral burning. But this is not what the critiques were contending. Instead, criticisms compared the funds raised after each tragedy and framed these events as if both buildings have similar importance to the world’s communities while pretending that people around the planet assume that the mechanisms which fund social housing are similar to those maintaining historical buildings. These are simple fallacies informed by cutting and pasting a capitalist model of more money means more important, rather than understanding how these two tragedies couldn’t be more different from top to bottom.

What is missing from these comparisons are several factors beginning with how the government treats the poor, the homeless, and those living in council flats. Situated in the Royal Borough of Kensington and Chelsea, Grenfell was seated in the heart of one of the wealthiest local authorities in the UK surrounded by some of the most expensive houses in the world. Indeed, Kensington and Chelsea has one of the widest gaps between the rich and the poor where the median income in this borough is £140,000 but the average income for those living in certain council estates is £15,000. And according to the research published by the UK housing charity, Shelter, one in seven families living in Kensington and Chelsea are technically homeless.

Also of note, this borough has a life expectancy gap between the rich and the poor, as the The Guardian highlights of a recent report on inequality in the borough: ‘In parts of Knightsbridge, near Harrods, a man can expect to live to 94; in a poorer part of the borough, near Grenfell, the average life expectancy for a man is 72, a figure which has dropped six years since 2010…’ Add to this that there are 6,000 homes owned by companies registered in tax havens, according to the report by Kensington MP, Emma Dent Coad. Written five months after the Grenfell fire, Dent Coad notes that the housing situation in the UK is getting worse, not better. More recently, she has repeated this claim noting that since the summer of 2017, ‘No progress has been made.’…

Now let’s skip over to how the maintenance of historical buildings is handled in the United Kingdom. Royal palaces, such as the Palace of Westminster (Parliament), are maintained at the expense of the public purse. Older buildings that are not used by the royals are funded by organizations like Historic Royal Palaces, a dependent charity which looks after the Tower of London and Kensington Palace among other public sites. Other organizations like Historic England, The Historic Buildings and Monuments Commission for England (HBMCE) was established by the National Heritage Act in 1983 and until 2015 was known as English Heritage.  Since 2015, the organization split into two—the Historic England and the English Heritage Trust which are financed by grant-in-aid (GIA) and self-generated income from research grants to the Lottery Heritage Fund, tax relief schemes, and heritage assets for periodic renewal and repairs. There are many organizations that are involved in the upkeep of Britain’s historic buildings among which English Heritage and National Trust are the two major organizations known for the upkeep of public heritage.

The buildings at risk of demolition around the country are assessed and efforts were undertaken to protect these sites where funding emanates largely from those who own the buildings—from private owners to institutions.  Museums, galleries, and other institutions housed in historic buildings like the National Gallery earn money from admissions to special programs, grants, fundraising, and then large donor contributions. Where the historic site concerns the Church of England, the Church Commissioners oversee the funding of each and every operation and this is repeated to buildings under the auspices of the Catholic Church and other churches. As for the palaces used by the royal family, the monarch is to maintain the royal palaces out of her income which is derived from the government and the Crown Estate. Although the queen has private wealth and personally owns Balmoral Castle and Sandringham House, the remaining palaces belong to the Crown Estate and are neither personal property of the monarch nor of the government. The revenue generated from the Crown Estate is what largely funds the restoration of its buildings.

So, when we look to media reports of social housing as opposed to how historical sites are represented, there really is no comparison. What goes into the media story of a blaze tends to be emotional and even dramatic simply because the magnitude of fires like these tend to have real life and death dangers in addition to lost heritage, community, livelihoods, and safety.  Ultimately, when people witnessed the fire in Paris’ Notre Dame Cathedral last Monday evening, watching helplessly as it burned, there were entirely different expectations as to what would happen to this historic monument. Just as people donated money to Grenfell, the funds flew in far more quickly and in far greater amounts for Notre Dame and the principle reason why is because, in the minds of many, the responsibility for the restoration of this massive historic structure is viewed as being part of world heritage. From the hundreds of millions of people across the planet who have visited Notre Dame to those who have longed to visit it and could not, only having read about this structure through the work of Victor Hugo, Notre Dame is one of those historical sites that people feel unites them as human civilization.

This cathedral has not only miraculously survived over 850 years of war, plague, plundering, and revolution. Notre Dame was also the historical site of the coronations of Napoleon I and of the English King Henry VI and it is where Napoleon married for the second time and Mary Stuart for the first. This magnificent cathedral is where Isabelle Romée, the mother of Joan of Arc, petitioned a papal delegation asking that they overturn her daughter’s conviction for heresy. And it was just outside Notre Dame in 2016 where a car, full of explosives, was discovered. It is almost a miracle that this is the first time that such significant damage has occurred…

Quite paradoxically, Hugo wrote The Hunchback of Notre-Dame, in order to save the cathedral from demolition. Prior to writing his novel, Hugo was working as an architectural preservationist when in 1825 he penned a pamphlet entitled ‘Guerre aux demolisseurs!’ (‘War on the Demolishers’) wherein he decries the destruction of France’s monuments.  During the 18th and early 19th century, French society had grown tired of its gothic buildings having been smitten by Baroque architecture. Hugo’s novel is a love story of Paris— its heritage, its architecture and the perseverance of a society to leave part of its heritage untouched…

See the full piece at Counterpunch.org

For background to the Notre Dame fire see the BBC website