Councillor calls on government to revoke demolition process without consultation 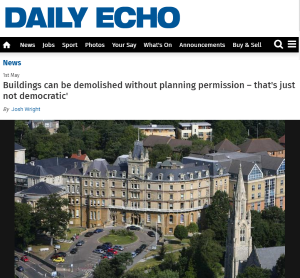 A Councillor is calling for the government to revoke a planning process which allows buildings to be demolished without public consultation.

Cllr Andy Jones, a Conservative candidate for Boscombe East and Pokesdown, said prior approval procedures were ‘undemocratic’ and that it had left people ‘angry and frustrated’. He has launched a petition on the Parliament website calling for it to be withdrawn, forcing developers to apply for planning permission to demolish buildings. Some smaller schemes which fall under permitted development rules require councils’ prior approval on certain aspects.

However, the scope of local authorities to consider proposals is much narrower than full planning applications. Bournemouth Civic Society has previously opposed the process as it does not take historic status into account meaning demolition cannot be opposed on heritage grounds. Prior approval has been used by Woldingham Developments to secure permission to knock down a 1930s Art Moderne home next to Central Gardens, despite applications for replacement buildings being refused.

Cllr Jones said the procedure was ‘undemocratic’ and raised concerns that historic buildings could be developed without any plan for what might replace them. ‘It’s an awful piece of legislation,’ he said. ‘It was brought in to speed up the planning process – which is fair enough – but there is no way for the public to raise any concerns. I want the issue to be considered by MHCLG (the Ministry for Housing, Communities and Local Government) and for them to hear the concerns we have with the process.’

His petition says: ‘Time and again I have been contacted by residents who are angry and frustrated that they are not able to formally object to the demolition of commercial and residential properties through the traditional planning route. Prior approval legislation enables landowners and developers to demolish properties without challenge by residents – this is totally unacceptable.’ Cllr Jones’ petition has had more than 100 signatures and he said he had also contacted MP Tobias Ellwood in a bid to win his support and secure a more direct path to the government.