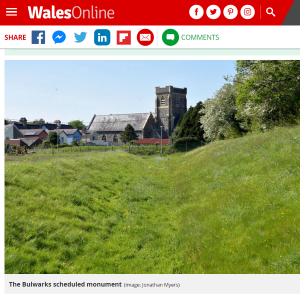 A nationally important historic monument, the Bulwarks in Carmarthen, has been dubbed one of the best preserved 17th century earthworks in the world, but could vanish under supermarket trolleys and cars according to a local Civic Society.

A supermarket giant has submitted plans which critics claim would pave over one of the most important monuments in the UK. The Bulwarks in Carmarthen is a scheduled monument, which makes it nationally important and gives it higher protection from development than even the highest grade listed building.

But Lidl has submitted plans to build a new store at Friars Park in Carmarthen, which would include demolishing the old police station. The Carmarthen Civic Society claimed the application would include building some of the car parking spaces over the civil war monument’s area. Now it has submitted a formal objection to Carmarthenshire County Council , which has adjourned a decision for advice from Cadw , the Welsh Government’s historic environment service. It is said the earthworks are the best surviving set of Dutch-style defences outside of Newark in Nottinghamshire and another in Hampshire.

In Carmarthen’s case they are the ‘best preserved town defences in their original form.’ Sally Bere, a member of the Civic Society and retired architect and planner, said: ‘The Civic Society is particularly worried about this because the car park would be built on the scheduled monument.’ She added: ‘It’s nationally important. The scheduled monument designation protects not just the siting of the monument but what’s in the boundary.’

She claimed the monument would have 20 plus parking spaces on it. A document supporting the society’s case said the monument was a stark reminder of the turbulent past experienced 334 years ago. It added: ‘Destroying its context would detach the local community from its shared history, without the links to the site, it will be forgotten. But at a national level, Carmarthen’s Bulwarks are hugely important; they are among the best preserved 17th century earthworks in the world, almost untouched, still retaining their original gradation and form and that should be something to cherish and be proud of, to be held up within re-enactment circles as to what one of these structures should look like.’