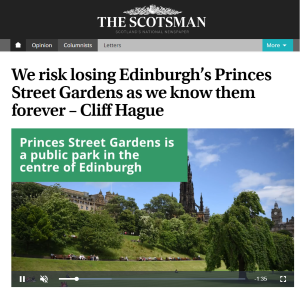 Exploring recent development threats to central Edinburgh and its World Heritage Site – including ‘permission… to add two storeys to the top of the Waverley Market, despite the damage this will do to the dramatic views of North Bridge and beyond to the coast’ – Cliff Hague, Chair of the city’s civic trust, the Cockburn Association argues that the council must act now to protect Princes Street Gardens.

Cliff Hague writes in the Scotsman:

What will the heart of Edinburgh – the Waverley Valley from St Cuthbert’s in the west to Regent Road in the east – be like in ten years’ time?

What do the citizens of Edinburgh want this definitive part of our city to be used for? How should its future be decided and by whom? These questions matter because significant changes are underway, and there is a risk that a series of piecemeal decisions could deliver overall outcomes that nobody really wanted.

Surprisingly for such an iconic place, there is no plan that looks at this area as a whole: instead it is being treated in bits, which carries the risk that by 2030 we end up with the whole being less than the sum of the parts that we have today.

Worked up proposals for West Princes Street Gardens are expected soon. These follow from the international design competition staged a couple of years ago. The centrepiece will be a new performance arena to replace the Ross Bandstand.

However, a visitor centre with café/restaurant built with an entry from Princes Street is also likely to be part of the design. There will be an upgraded family area on what is now the red blaize and children’s playground near the fountain, and a new use for the south-facing shelters, as well as a new, bigger bridge over the railway at the King Stables Road entrance. Just how all of this will fit into the landscape of the gardens is something that will need to be looked at carefully. There is certainly scope to enhance the existing gardens, but it is important to remember that the thing that people most love about them is that they provide much loved peace and tranquillity in the centre of the city, and are open to all for free.

The Cockburn Association believes that Princes Street Gardens should be just that – gardens. We worry that the provision of a major ‘world-leading’ venue for gigs will see a creep to staging more large events. If that were to happen then ten years from now West Princes Street Gardens would become a performance arena with supporting catering, set amongst some residual grass and trees. In all this, the business plan and risk assessment will need careful public scrutiny: if income falls short of expectations, will the financial gap have to be filled by more high profile events?

The design of the new facilities matters too. Those listening to concerts in the Royal Parks in London hire deck chairs, so the character remains that of a park: permanent seating would tip the balance towards an entertainment venue.

Currently the area around the National Gallery is blocked off while construction work proceeds, following the felling of trees just before the Christmas Market began. This is a reminder that the scale of change proposed for West Princes Street Gardens implies a substantial period when they will be transformed into a building site.

Meanwhile East Princes Street Gardens effectively has been converted into a funfair for the couple of months around Christmas and again for the period in the summer around the festival. In the periods inbetween, there is turf to be re-laid and other damage to be restored.

In many respects, these already highly commercialised ‘gardens’ would be a better site for the new performance arena, since the steeper valley offers a more natural amphitheatre. By not having any proper plan for the valley, such an option probably has been lost.

A permission was recently granted to add two storeys to the top of the Waverley Market, despite the damage this will do to the dramatic views of North Bridge and beyond to the coast, and despite this representing a departure from planning policy over the last 40 years.

Now Network Rail has come forward with another very significant, but again ‘one off’, proposal to raise the roof, literally, at Waverley Station…

Instead of looking at the valley as a whole and consulting with the public on an integrated plan which is then used to inform and regulate development, the council is in reactive mode, and the consultation process is fragmented into an invitation to endorse a series of disconnected proposals…

So when you come to the final question – ‘the preferred Masterplan requires a trade-off between the extent of existing historic structure that is retained and the benefits delivered by modern reconstruction. To what extent do you agree that the preferred masterplan strategy achieves the right balance?’ – you know what your answer should be! An integrated plan would look at all these sites and surrounding areas together…

Bit by bit, spin by spin, council officials are responding to commercial pressures by divesting Edinburgh’s citizens of one of the jewels of their inheritance, the Waverley valley. Instead of a long-term plan for the whole, we have a bits-and-pieces, developer-led approach, where anything goes as long as it is labelled ‘world class’ and promises more jobs, tourists and GDP. Damage has already been done, and more is in the pipeline waiting to be nodded through. Unless we change direction now, over the next few years the qualities that make Edinburgh’s centre special will be traded away forever…