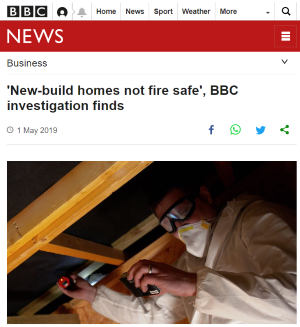 New-builds constructed by the firms were sold with missing or incorrectly installed fire barriers, which are designed to inhibit the spread of fire. In some cases, it’s thought a lack of fire barriers contributed to the spread of fires that have destroyed homes. Persimmon Homes and Bellway Homes both said they were addressing the issue. Building Regulations require that by law new homes are built with fire protection measures to delay the spread of fire and allow crucial time for escape.

In many new builds, particularly timber-framed buildings, fire barriers are a vital part of this fire protection. The barriers are used to form a complete seal between different areas of a home, and without them, experts say, fire and smoke can spread five to ten times faster.

‘A comparison is if you were to buy a new car and you ultimately found that it didn’t have an airbag in it […] It’s an integral safety feature within the home,’ said industry expert Andrew Mellor. Responsibility for ensuring that buildings are compliant with Building Regulations ultimately lies with the house builder. In the cases the BBC has uncovered, serious breaches have gone undetected during construction, leaving homes and lives potentially at risk if fire breaks out…

Subsequent investigations by Persimmon Homes found missing fire barriers at 37% of homes on the Greenacres estate. This triggered a huge inspection programme of thousands of homes across the South West region, where more than 650 homes were found to have missing or incorrectly installed fire barriers. Some of these issues have not yet been rectified – and some homes have still not been inspected.

Outside the South West, in Coventry, a Persimmon Homes building containing some 48 apartments was evacuated in 2018, following the discovery of a number of defects including missing fire barriers. Some residents are still living in temporary accommodation while retrofitting and other works are carried out…

BBC Watchdog Live also uncovered potentially dangerous fire safety issues in developments in Kent and West Lothian built by Bellway Homes. In 2015, a fire took hold in a block of Bellway Homes flats in Canterbury, Kent, and spread through dozens of properties, destroying or damaging 45 of them. Subsequent inspections highlighted concerns over fire stopping in the wall cavities. Residents at the Old Tannery development have since been moved out while ‘improvement works’ to address these fire safety issues are carried out at their homes.

In Scotland, BBC Watchdog Live sent its own expert surveyor to a new build Bellway Homes development in West Lothian, to examine the fire protection at four houses, after concerns were raised by one resident whose house had previously been found to have inadequate fire barriers. Surveyor and expert witness Greig Adams, who carried out the testing, found poorly fitted fire barriers at all four properties, with voids and gaps around them that would prevent them stopping fire from spreading. He said that the homes are not fire safe: ‘What we’ve unfortunately found is that there are fire breach issues in every house we’ve looked at. It’s a legal requirement that the cavity barriers are to be there. It’s not optional- and with good reason: it saves lives’

Bellway Homes said it was ‘committed to improvement…’