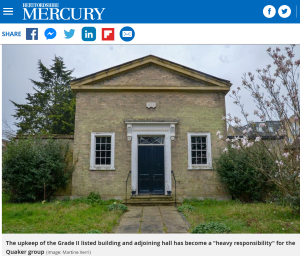 The Hertfordshire Mercury has reported on plans that have been submitted for the demolition of the meeting hall attached to the Grade II (GII) listed Friends Meeting House in Hoddesdon.

The site, situated just outside the town centre, comprises of the Grade II listed Friends Meeting House, with adjoining Friends Meeting Hall and two-bedroom cottage. The Hoddesdon Options Group, of the Hertford and Hitchin Area Meeting of the Society of Friends (Quakers), have been working for more than two years to ensure a future for the listed building, built in 1829.  And in September 2018, the historic Georgian building on Lord Street opened for the first time since its last meeting in 2011 in hope of finding a use for it.

However, despite community groups expressing an interest in using the almost 200-year-old building, a future was not secured, and it has become difficult for the area meeting group to maintain the upkeep of both buildings.  Plans for a previously withdrawn scheme have since been amended and resubmitted and propose to demolish the adjoining hall for a small housing development as a means of ensuring the maintenance and protection of the adjacent Grade II Listed Meeting House. Initial plans were met with confusion by residents as proposals originally implied demolition of the Grade II listed building itself. However a spokeswoman from Historic England confirmed this to be untrue, and explained the application seeks to demolish the red brick Meeting Hall, along with a modern linked extension attached to the Grade II listed Friends Meeting House next door.

Convener of the options group, Anthony Cole, said: ‘The 1829 Meeting House with its distinctive Quaker burial ground behind and the adjoining Quaker Hall are reminders of the strong Quaker presence in Hoddesdon exemplified by names like John Warner. Unfortunately the Meeting was laid down several years ago and the upkeep of the two buildings has been a heavy responsibility for the Area Meeting. The Options Group has considered many ideas as to how to ensure the future of the Meeting House and last summer we engaged with the local community to identify how the Meeting House could be refurbished and extended for a worthwhile social and community use and we plan to continue this summer. After much heart-searching the Area Meeting has decided that the only way to ensure that the social and community use can happen is by the demolition of the Quaker Hall and the sale of the site for housing. The funds from the sale are to be restricted by a legal agreement to the conservation and renovation, and extension, of the meeting house. As Quakers, we are very concerned about the lack of social housing and it is our primary intention to promote the development of the site for this purpose. The size of the units and the limited car parking is a response to our intention to make available as many units as possible and also to maximise the funds available for the desired new use of the meeting house.’….

Closures to Lord Street due to utilities work for the High Leigh development have now been lifted and works under traffic lights are planned to be completed by early April.  Applications can be found on the Broxbourne Planning Portal under 07/19/0081/LB or 07/19/0080/F.