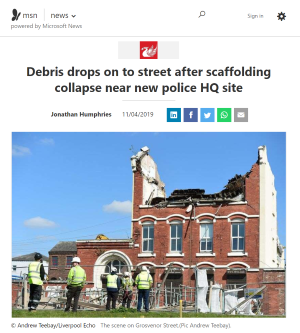 Parts of a building due to be cleared to make way for the new £45million Merseyside Police HQ collapsed into the street and scaffolding and debris from Grosvenor House, on Grosvenor Street behind St Anne Street Police Station, Everton, was fenced off after the collapse.

Scaffolding and debris from Grosvenor House, on Grosvenor Street behind St Anne Street Police Station, Everton , was fenced off after the collapse today. No-one was injured in the collapse. The roof of the building appeared to have collapsed and a scaffolding frame fell away, landing on the roadside. Kirk Scaffolding, the company providing scaffolding to the scheme, confirmed there had been no injuries but refused to comment on the incident. A spokesman for construction firm Wilmott Dixon, which is managing the project, said: ‘At around 1pm we did have a minor scaffold collapse during demolition works, however no one was injured. The collapse was within our exclusion zone and has had no impact on the surrounding environment or community.’

The ECHO revealed in 2016 that the force wanted to move from its existing Canning Place home to a purpose-built complex to the north of the city centre. The force says its current home is not fit for purpose. And it also says its new home could help the redevelopment of north Liverpool. There will be a central main building and a smaller annex next door, all surrounded by car parking and some green space.