IHBC’s ‘Heritage from the (church) doorstep’: ‘Timebomb’ of the lost churches and chapels of the Yorkshire Dales 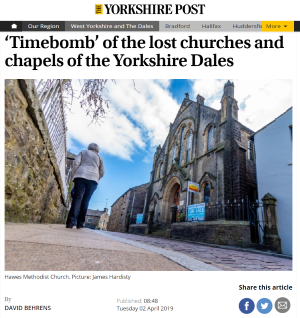 The Yorkshire Post has reported on the ‘Timebomb’ faced by local places of worship in the Dales, including in the heart of Hawes where ‘a little church has stood for more than a century’ but, being without a service for four years, in 2017 it was sold by the Methodist Church for a reported £70,000, and now its future is uncertain as three years of advertisements to find a community use are said to have brought forth no takers.

There had not been a service there for four years when in 2017 the Methodist Church sold it for a reported £70,000. Last month, a plan to convert it into holiday lets was rejected – a ‘step too far’, said objectors. Its future is now uncertain. Three years of advertisements to find a community use are said to have brought forth no takers. It is not alone. The chapel stands as a symbol of the changing face of the Dales – a time bomb, one expert called it – as the area evolves from a patchwork of self-contained communities to a to a landscape of holiday cottages whose part-time occupants sometimes outnumber the locals. No-one has kept track of exactly how many places of worship have closed across the National Park in the last few decades. The number is certainly in double figures, and parish churches as well as chapels are under threat.

At East Witton, above Masham, a quintessential former place of prayer is now an attractive two-bedroom cottage. In Buckden, the old Wesleyan Chapel, put up in 1891, now sleeps four, and just off the village green at Thoralby, near Leyburn, holidaymakers can enjoy king size beds and a games room. ‘The loss of a chapel isn’t as damaging to a community as the closure of the school or a shop, but it’s still an asset and a community centre,’ said Malcolm Petyt, a trustee of the campaigning charity Friends of the Dales, and a Methodist in the Sedbergh Circuit, which has seen a marked decline in religious venues. ‘But it’s typical of what’s happening. The church goes, the school goes, the shop goes, and then they the villages become just dormitories, and people very often have to start travelling to the larger centres.’

Mr Petyt remembers worshipping in the 1970s at a chapel at Garsdale Foot, near Sedbergh. Like many similar houses of God, it has been abandoned to storage and lost to the locals. ‘There’s been talk of converting it but they decided they couldn’t afford it, and so it’s standing there rather perilously. It’s been empty for nearly 40 years,’ he said. Most such buildings live on, however – if not as holiday homes then as outdoor centres. ‘What I have been keen to press for when I see one being closed is for some trace to remain of what it was, because it will have been part of the cultural heritage of the area,’ Mr Petyt said.

Population migrations in the Dales are not new. Swaledale once had a huge community of lead miners, and when they left, the chapels built for them became redundant. Elsewhere, so-called ‘tin tabernacles’ – corrugated metal huts lined with timber – were erected for the use of itinerant workforces. A few remain, including an old Wesleyan building at Thorlby, near Skipton, its walls mouldy and its railings brown with rust.

‘They’re quite rare and also ephemeral and fragile,’ said Miles Johnson, senior historic environment officer at the National Park. ‘Some of them are also quite vulnerable and not always recognized through listing or given any protection.’ It was in the transient working communities that nonconformity thrived, said Neil Redfern, Historic England’s development advice leader for Yorkshire. ‘We view the Dales today as this beautiful, tranquil landscape, but in the 19th century it was a serious industrial area,’ he said. ‘There was lead and slate mining, quarrying, and in areas like Ribblehead, vast navvy camps. Those communities are where nonconformity found an audience.’

The abandoned chapels are partly a legacy of that era.  ‘Established communities with parish structures were one thing, but you also got these other communities of people who were just employed there,’ Mr Redfern said. ‘They’ve been sold off and become holiday lets, and that might partly represent the conundrum of what to do with them and the whole question of second homes in the Dales.’ Parish churches in the Dales – which are less easy than chapels to convert – are equally at risk of abandonment, Mr Redfern warned. ‘An awful lot of churches are at risk now or on the cusp of becoming at risk,’ he said. ‘There are dwindling congregations and an increasing struggle to maintain the buildings, and that’s a kind of time bomb. I think there’s a real risk to religious buildings. A lot of them are listed, and that creates a challenge in terms of how they’re used. They’re vulnerable to lead theft, and if there isn’t enough of a congregation to look after them, it opens up all sorts of questions.’