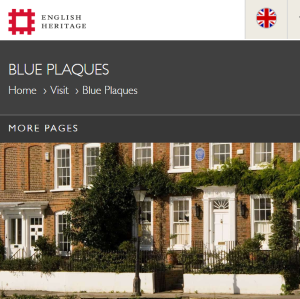 English Heritage (EH) has revealed some of this year’s blue plaques to commemorate notable people of the past who have lived and worked in London, including a reggae singing sensation, a pioneering war correspondent and an award-winning novelist will receive English Heritage blue plaques.

A reggae singing sensation, a pioneering war correspondent and an award-winning novelist will receive English Heritage blue plaques in 2019.

They follow filmmaker and gay rights campaigner Derek Jarman whose plaque was unveiled today. The plaque marks the large former warehouse in Butler’s Wharf where Jarman lived during the 1970s. It was here that he made early experiments with Super-8 film and adopted the style for which he became well known.

English Heritage Trustee and Blue Plaques Panel Member, David Olusoga, said: ‘Jarman was a major cultural figure of the last quarter of the 20th century. He was a unique voice in cinema, an important campaigner for gay rights, a painter and a gardener. He brought a creative and disruptive energy to everything he did, at a time when it was urgently needed. We are delighted to honour him here on the South Bank, where he began to create his Super 8 universe.’

Another famous personality to be commemorated with a blue plaque this year includes Jamaican singer-songwriter Bob Marley. His plaque will be installed at the Chelsea house where he lived in 1977. It was while living here that Marley and the Wailers finished recording their album Exodus. The house is also near the pitches in nearby Battersea Park where Marley and his bandmates played football.  Some of the pioneering women to be honoured with a blue plaque include war correspondent Martha Gellhorn, who had to fight for her place in the male bastion of war reporting, and Britain’s first qualified female dentist Lilian Lindsay.

David Olusoga said: ‘From engineering to music, this year’s blue plaques remind us of the enormous range of human achievement.  Lilian Lindsay and Martha Gellhorn were pioneering women who broke the glass ceiling in their professions and we are honoured to recognise their achievements. Personally, I am particularly excited by the Bob Marley plaque. Marley was more than a brilliant musician, he became a cultural icon who blazed a trail for other black artists. All of our blue plaque recipients called London home, at least for a while, and our plaques are a testament to the creativity and variety of this city.’

Some of the 2019 blue plaque recipients:

Gertrude Bell (1868-1926): Traveller, archaeologist and diplomat Gertrude Bell became involved in politics in the Middle East during the First World War. She went on to play a considerable role in establishing the modern state of Iraq following the fall of the Ottoman Empire. Bell’s plaque will mark a family home in Chelsea that served as her London base for over 40 years, from 1884 until her last visit to London in 1925.

Angela Carter (1940-1992): Award winning novelist Angela Carter will be honoured with a blue plaque this year at her former home in Clapham. It was here that Carter spent the last sixteen years of her life. She often tutored her then student, Kazuo Ishiguro, at the kitchen table and received fellow writers – J.G. Ballard, Ian McEwan, Salman Rushdie – as guests. Carter’s unique, witty and widely acclaimed novels include Nights at the Circus, with its unforgettable trapeze-artist heroine, and Wise Children, a comedy about 75-year-old twin chorus-girls.

Martha Gellhorn (1908-1998): Writer and war correspondent Martha Gellhorn made her name writing about ordinary people living under the adversity of war. She fought for her place in the male bastion of war reporting in the early twentieth century and once sidestepped the American military’s disapproval of female journalists by stowing away in a hospital ship – an act that allowed her to report first-hand on the Allied invasion of France in 1944. The plaque will commemorate Gellhorn’s twenty-eight-year residence in Cadogan Square. With this as her base, she continued writing and reporting into the 1990s, consolidating her reputation as an important and influential journalist.

Lilian Lindsay (1871-1960): Lilian Lindsay was the first woman to qualify as a dentist in Britain, overcoming many obstacles on the way. Having tried, unsuccessfully, to enrol at the dental school of the National Dental Hospital – who interviewed her on the pavement outside, as women were not allowed to cross the threshold – and the Royal College of Surgeons, Lindsay went on to study dentistry at Edinburgh Dental Hospital and School, qualifying with honours in 1895. This year, Lilian Lindsay’s plaque (originally marking a now demolished building in Islington) will be installed at a new location at the former British Dental Association’s headquarters, Russell Square, Bloomsbury, where Lilian Lindsay worked from 1920-1935 and lived in an upstairs flat.

Bob Marley (1945-1981): Bob Marley remains one of most listened to musicians of the twentieth century and is often described as the first superstar to have emerged from the developing world, blazing a trail for other artists. Marley’s plaque will mark the house in Chelsea where he and the Wailers lived in 1977. It was while living there that the band finished recording Exodus, the album that featured some of his biggest hits, including ‘Jamming’, ‘Waiting in Vain’, ‘Three Little Birds’ and ‘One Love’.

Sir John Wolfe Barry (1836-1918): Sir John Wolfe Barry was one of the most prominent and highly respected civil engineers of the late nineteenth century. Often cited as his greatest achievement, the construction of Tower Bridge earned him world-wide renown and left London with one of its most famous landmarks. The new plaque will mark the large Norman Shaw designed building overlooking the Thames that was the engineer’s home from 1909 until his death in 1918.

English Heritage is currently working with the property owners and all blue plaques are subject to full owner approval.