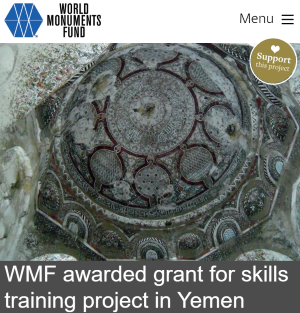 Taiz is the third largest city in Yemen, and the former national capital.  Picturesquely situated at the northern foot of Mount ?ubr, the walled city grew to prominence in the eleventh century.  The city reached its golden age as the capital of the Rasulid dynasty, which ruled all of Yemen during 1229-1454.  The Rasulid built lavish palaces in Ta’izz, as well as mosques and madrassas, including those of al-Mudhaffar, a WMF 2012 Watch site. Taiz’s rich historic fabric includes many fine, elaborately decorated multistory houses, and several Ottoman palaces, one of which is now the National Museum.

Our new project involves working with the General Organization of Antiquities and Museums (GOAM), researchers and students from the University of Taiz and volunteers to identify buildings facing critical needs and carry out emergency repairs at the National Museum, and to continue the process of preparing a conservation plan for the old city that was interrupted by the war.  Work will commence in December 2018, and conclude in Dec 2019.

This is our third grant from the UK Government’s Cultural Protection Fund, the others being the Syrian Stonemason Training Project in north Jordan, and for Amedi, in Iraqi Kurdistan (a 2016 Watch site).  We are the only organisation to have been awarded more than one grant from the CPF.

Taiz is now a battleground in the civil war that has consumed Yemen since early 2015, claiming over 10,000 civilian lives.  Rebels initially seized the citadel, which was subsequently targeted and damaged by airstrikes in May 2015. Since then the city has been under siege from rebels seeking to wrest control of it from the government. In 2016, the National Museum was shelled and its collection of manuscripts was destroyed, while a historic sixteenth-century mosque was blown up by extremists.  World Monuments Fund placed the historic city on the Watch in 2018 as an expression of concern for the protection of the historic built fabric of Taiz, and for the welfare of its citizens.