The Iron Bridge reopens to the public following £3.6 Million Project 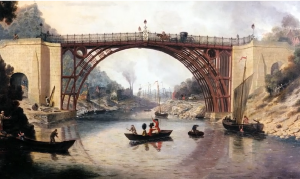 English Heritage’s £3.6 million conservation project to repair and restore the Iron Bridge in Shropshire has been completed and it is now open to the public.

Restorations to the world’s first bridge made of iron have been unveiled, following a year-long conservation project to save the structure for future generations. From this month the Iron Bridge is once again fully open to the public. The bridge was built in 1779 across the River Severn in Shropshire and is considered a symbol of the Industrial revolution. The £3.6 million investment by English Heritage included meticulous repairs to the bridge including bespoke replacements for hundreds of iron wedges that hold the structure together.

Visitors will also notice a change in colour. It took six painters and 2400 litres of paint to return the bridge to its original red-brown hue after new evidence came to light during the conservation process. The paintwork is now the same colour as depicted in William Williams’ 1780 painting, Cast Iron Bridge near Coalbrookdale, which is one of the earliest depictions of the structure.

Kate Mavor, English Heritage’s Chief Executive, said: ‘Caring for an internationally significant historic structure such as the Iron Bridge is at the heart of English Heritage’s charitable purpose. The Iron Bridge was revolutionary when it was built, it has long been copied but it could never be replaced — so it was vital for us to undertake this major project to conserve it for future generations. We know how much the Iron Bridge means to people near and far, whether as the cradle of the Industrial Revolution, the spot for a romantic proposal, a memorable holiday, or just the view from the window every day. As a charity we’re committed to securing the bridge’s future and we’re extremely grateful for the support and hard work of everyone who has played a part.’

The Iron Bridge was the first single span arch bridge in the world to be made of cast iron and was a turning point in British engineering —it’s the great-great-grandfather of today’s railways and skyscrapers. The bridge remained in full use by road traffic and pedestrians for more than 150 years, but it was closed to vehicles in 1934 when it was designated an Ancient Monument. The whole area of Iron Bridge Gorge became a World Heritage Site in 1986. However, 21st century investigations showed that the Iron Bridge was under threat from cracking due to stresses in the ironwork dating from the original construction, as well as ground movement over the centuries, and an earthquake in the 19th century. English Heritage began work on saving the bridge in 2017. The project was generously supported by the public. This included a €1 million donation from Germany’s Hermann Reemtsma Foundation and English Heritage’s first crowd-funding campaign. Today, the Iron Bridge is open to pedestrians and free to visit.