IHBC Nottingham 2019 – ‘Perspectives to take to School’: Notre Dame, the story so far… 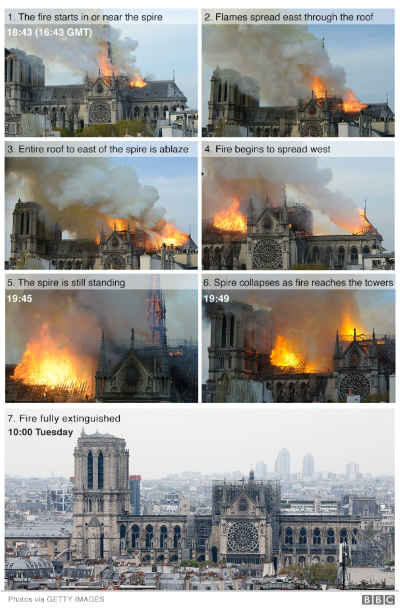 Paris’ Notre-Dame Cathedral, one of Europe’s most celebrated religious buildings, was devastated by a fire Monday night, while its investigation, restoration and reinstatement undoubtedly will be a focus – and touchstone – of conservation philosophies for decades to come.

While the cathedral’s main structure survived, the roof and spire (more properly, the flèche) were destroyed in the blaze.  The fire quickly spread across the roof and cathedral’s spire collapsed around an hour after the fire started. Saving France’s 850-year-old Notre-Dame cathedral came down to a crucial time window of 15-30 minutes, France’s deputy interior minister Laurent Nuñez has said.

Although the cause of the fire is still unclear, French prosecutors said on Tuesday that it was most likely an accident, possibly related to restoration work that had been underway since 2017.

French President Emmanuel Macron has vowed to rebuild the famous cathedral: ‘We will rebuild it. All together.’  He announced a plan for the Cathedral to be rebuilt ahead of the Paris 2024 Olympics but conservation professionals have suggested it could take much longer: ‘French conservation architect Pierluigi Pericolo said it would take ‘no less than 15 years’, according to the Associated Press. He said it could take up to five years to evaluate the cathedral’s stability.

‘It’s a fundamental step, and very complex, because it’s difficult to send workers into a monument whose vaulted ceilings are swollen with water’, Pericolo told France-Info. ‘The end of the fire doesn’t mean the edifice is totally saved. The stone can deteriorate when it is exposed to high temperatures and change its mineral composition and fracture inside.’

Emily Guerry, a senior lecturer in Medieval European History at the University of Kent, told CBS News that rebuilding could take up to 40 years. ‘If we’re very fast maybe 20 years, but it will be a generation. This is going to be a huge communal effort. The cost will be exorbitant,’ she said. Pledges and donations, so far totalling £692 million, have been made towards the restoration, including substantial amounts from the wealthy but also smaller donations by ordinary people.

France is to invite architects from around the world to submit their designs for a new spire to sit atop a renovated Notre-Dame cathedral.  Prime Minister Edouard Philippe told reporters they hoped for ‘a new spire that is adapted to the techniques and the challenges of our era’.

The cathedral is the property of the French government, as is every church in France.  In recent years, the French government had offered up to 40 million euros, over the next decade, The Times reported.  But the strict separation of religious and secular life in France, dating back to the French Revolution, has made it unclear who is responsible for maintaining the cathedral.

Following widespread concern, those responsible for the fire safety of other important buildings have responded that they are taking action to prevent this disaster befalling them: The Palace of Westminster is working to make the building safe. The master builder of the Cologne Dome said the German building did not face the same risk as Notre-Dame because its roof structure was made of iron.

Like many historic buildings affected by fire Notre Dame was undergoing restoration works.  The introduction of temporary electrical temporary fittings and lighting and hot works in the building, adding new combustible materials like scaffold planks and removing existing fire separation for repair, covering fire alarms to prevent dust setting them off, can all pose a threat.  But detection systems, sprinklers and temporary fire separation can help lessen the effects if fire does occur.

Firefighters at Notre Dame managed to save many important items from inside the cathedral, including relics such as the Holy Crown of thorns and the contents of the cathedral’s treasury. Having appropriate fire planning procedures in place for preventing fire spreading and removing important contents are some of the most vital pieces of planning needed before renovations and at all other times as well.

The IHBC Annual School in Nottingham from 4th to 6th July will cover all manner of possible risk to heritage including fire and look at how risk can be managed and resilience developed.  How to prevent fires, in historic buildings of all types, and how to deal with the worst if it happens, will be a central theme of the School.

For more on the IHBC Annual School see nottingham2019.ihbc.org.uk