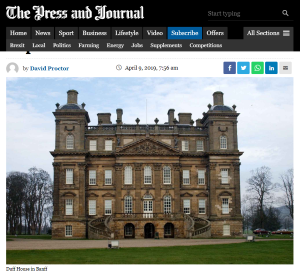 The Press and Journal has reported on talks being held to find the best way to improve Duff House Woodland Parkland, surrounding Duff House in Banff – once part of the estate, but sold off over the years – as the landowners and the council now take responsibility for its upkeep.

The Press and Journal writes:

The area is home to an ice house and ancient mausoleum and both can be reached on a path which leads walkers through the woods. It is a popular walking spot for families who can venture into the wooded grounds and appreciate the architecture. But fears have been raised about the quality of the route due to general wear and tear and new trees sprouting up along it.

Banff councillor John Cox previously raised concerns and is pleased that a new group has been set up to help safeguard the trail. Aberdeenshire Council and Historic Environment Scotland are involved in the discussions about tidying up the area. Mr Cox said it was important that the path was maintained so visitors and locals could continue to access the historic buildings. He said: ‘There was the installation of a pathway to the grounds leading to the mausoleum. Unfortunately over the years new trees have seeded and have changed aspects of the planned woodland. A significant number of trees have died which has left some areas in danger. It is important to this area with the ice house and mausoleum and the walk goes through to the iconic Bridge of Alvah. The focus of the group is to look at Duff House and enhance it as a visitor attraction, a fantastic walk and the education of young people who live here.’

The estate was bought by private owners in 1975 but the house was gifted to the towns of Banff and Macduff.  It is now managed by Historic Environment Scotland.