IHBC’s ‘Heritage from Belfast’s doorstep’: Proposal to turn Clarence Chambers into new offices given the green light despite heritage and civic concerns 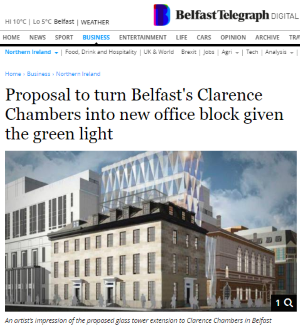 Newry businessman Brian McConville’s bid to redevelop the listed Clarence Chambers building in the centre of Belfast into a modern office development has won the approval of planning officials despite heritage and civic concerns.

The plan involves the partial demolition of the rear of the early 19th century building next to City Hall, and construction of a seven-storey glass extension, as well as the addition of a new bar and restaurant.

The development also includes an extensive refurbishment programme within the listed building and a new roof terrace. A report recommending that the project go ahead will go before Belfast City Council’s planning committee on Tuesday. Mr McConville, who heads the Newry based MJM Group, bought the building in recent years under the guise of MJM Pearl Ltd. The same company acquired the nearby Pearl Assurance House at 1-3 Donegall Square East in late 2015.  Last month, MJM submitted a planning application to refurbish and extend the building to create a restaurant and cafe space across basement. The plans include four floors of offices, topped by an apartment…

MJM’s plans prompted representations from Belfast Civic Trust and Ulster Bank, with both citing concerns. Belfast Civic Trust claimed the design was ‘inappropriate to the locale’, calling for a more traditional building material to be utilised rather than the glass proposed. Ulster Bank, which has its Northern Ireland headquarters next door, cited concern over the potential loss of light. However, the council’s conservation officer’s analysis concluded: ‘The extension would be sympathetic to the scale, style and proportions of modern extensions within the area. The visual prominence and historic fabric of the existing listed buildings would be fully retained and preserved.’