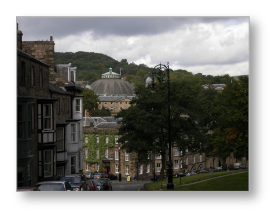 Buxton’s town leaders are getting together to set out a bid for up to £2million-worth of funding to help boost Buxton’s high street.

The bid for the Future High Streets Fund comes as figures show the town centre has a shop vacancy rate of 11 per cent – nearly one per cent higher than the national figure. However following the announcements that Marks and Spencer, Santander bank and H Samuel are all due to close, this figure is set to rise. Tony Kemp, High Peak Borough Council’s member for tourism, regeneration and licensing, says Buxton has been hit particularly hard by the departure of such high street names. He and other members of the economy and growth committee will now be focusing on setting out Buxton’s case for a share of the government’s £650m in funding for ailing town centres.

Coun Kemp said: ‘This will not be a massive amount of money but we are a town which has a large number of high street names – unlike other High Peak towns such as Glossop which has more independents. Now we have until March 22 to show there’s a real problem in Buxton. If we get past that stage we will set out a plan for what needs to be done – working with a government task force which offers advice to towns on what funding to apply for.’ He said Buxton’s funding bid stood a good chance of being accepted due to backing from the Heritage Lottery Fund and Historic England – which have invested more than £30m and £500,000 in the Crescent development. He said: ‘Hopefully with their support we should get somewhere. This is completely new so we have no experience to go on – we don’t know exactly what the government will provide money for. But we’re in there to get something for Buxton no matter what is being offered.’

High Peak MP Ruth George is inviting Buxton traders to discuss what can be done to encourage shoppers and businesses during a meeting next month. The meeting at Buxton Methodist Church on Thursday March 7 will also focus on tackling crime in the town centre and will be attended by police. Mrs George said: ‘I’m keen to support local retailers as I know things are far from easy on our high streets – especially in Buxton following the recent announcements.  A specialist officer will be there to discuss how police and retailers can best work together to prevent crime.’ The meeting will take place between 7pm-8.30pm. Those unable to attend can send their views by emailing ruth.george.mp@parliament.uk.