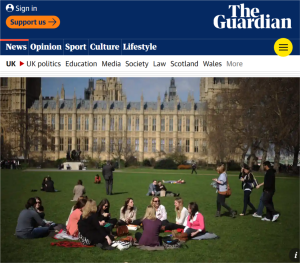 Proposals for a Holocaust memorial have been dealt a blow after the charity responsible for looking after the central London park in which it is supposed to be built said it was opposed the move as it will have ‘significant harmful impacts’.

The new landmark, which would also feature a learning centre, is planned for Victoria Tower Gardens on Millbank, alongside the River Thames close to the Houses of Parliament. It will be dedicated to the 6 million Jewish men, women and children and other victims murdered by the Nazis.

A planning application for the memorial is currently being considered by Westminster city council. But Royal Parks, a charity which looks after Victoria Tower Gardens, said it did not support the planning application ‘given the impact it will have on a popular public amenity space in an area of the capital with few public parks’.

In a letter to Westminster’s planning team, Royal Parks described the gardens as a ‘highly sensitive location in planning and heritage terms’ It said the small triangular green space was a grade II registered park located next to Westminster Abbey and the Houses of Parliament – collectively designated as a world heritage site.

The Holocaust memorial’s design features 23 large bronze fin structures that visitors can walk among, leading up to the underground learning centre.  Royal Parks said it ‘strongly supports’ the principle of the project but believes its scale and design would have ‘significant harmful impacts’ on the ‘character and function’ of the park. It warned the learning centre would ‘fundamentally change the historic character and associated vistas in and out of the park’. ‘The structure will dominate the park and eclipse the existing listed memorials which are nationally important in their own right,’ the letter added.…