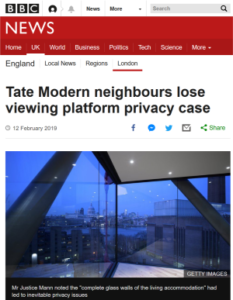 Residents in glass-walled apartments worth up to £3.5m have lost their bid to stop visitors to the Tate Modern gallery looking into their homes.

The owners of four flats in the Neo Bankside development on London’s South Bank claim the neighbouring gallery’s viewing platform caused a ‘relentless’ invasion of their privacy. But the Tate argued residents could simply ‘draw the blinds’. Their claim was dismissed at the High Court…

In his judgment, Mr Justice Mann said the claimants have ‘submitted themselves to a sensitivity to privacy’ due to the extensive use of glass walls in their properties. He added: ‘These properties are impressive, and no doubt there are great advantages to be enjoyed in such extensive glassed views, but that in effect comes at a price in terms of privacy.’

The five claimants had been battling the gallery since the viewing platform opened in 2016. Visitors are offered ‘360 degree views of London’ from an enclosed walkway around all four sides of the Tate Modern’s South Bank building. The claimants had sought an injunction requiring the gallery to ‘cordon off’ parts of the platform or ‘erect screening’.

In a statement after the ruling, Natasha Rees, who acted for the five residents, said: ‘We are extremely disappointed with today’s result…