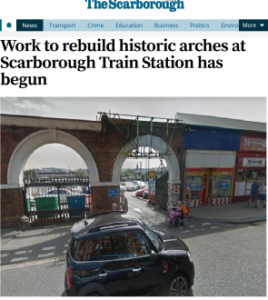 The Scarborough News has reported on how two of the historic railway arches at Scarborough train station are to be demolished and rebuilt after being damaged by a vehicle, offering a perspective for delegates to take to the 2019 Nottingham School.

Network Rail’s application to the council noted: ‘In 2017 the boundary wall to Scarborough Station was damaged when a skip wagon ran into the wall on exiting the car park.  The impact caused the wall to move and requires partially rebuilding as the structure is currently unsafe. The wall is scaffolded to prevent collapse.’

The station was listed in 1973. To the south of the main train station is the former excursion station designed by William Bell. This is also a Grade ll listed building; it is within the former excursion station that the wall is listed. The rail company’s report adds: ‘It has been established through survey work that the first arch and part of the second arch need to be rebuilt.  The proposal is to rebuild these sections of the wall to the same design reusing the existing materials where possible and were not to match the existing with replacement reclaimed or new material.’

The plans were given approval under delegated powers by Scarborough Council’s planning officers.