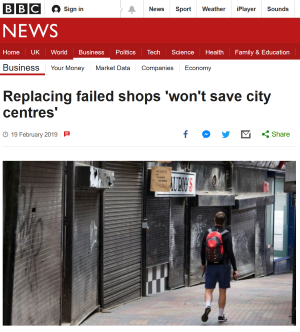 The Centre for Cities think tank say that authorities should focus on attracting high-paying office jobs to support city centres rather than replacing ‘failed shops’.

The Centre for Cities suggests that people will come back to the High Street for restaurants and cafes if there are good jobs to be had nearby. It said: ‘Successful city centres feature fewer shops, but are supported by ‘knowledge-based’ office jobs.’  It added government cash was needed to attract office jobs and leisure firms.

Good quality office space should be preserved rather than allowing it to become flats, the think tank said. ‘We must remember that a successful High Street is the result, not the driver, of a successful city economy,’ Centre for Cities chief executive Andrew Carter said. ‘Instead of trying to replace failed shops with more retail, investors and policy makers should focus their strategies on making struggling city centres attractive places to do business and spend leisure time – not just to shop.’

The think tank’s research suggested that the most successful cities have a larger proportion of food and leisure businesses. And while business rates and internet shopping are often thought to have hurt the High Street, the think tank said these were ‘red herrings’. ‘The real challenge for retailers is insufficient footfall in their city centres, due to the lack of jobs in these central locations, which would provide customers during the week,’ it said.

The think tank suggested that city leaders be allowed to access to the government’s £31bn National Productivity Investment Fund in order to make investments to attract businesses. In November, a report from accountants PwC said that about 14 shops were closing every day, with UK High Streets facing their toughest trading climate in five years. PwC said more than 1,000 shops disappeared from Britain’s top 500 High Streets in the first six months of 2018.

The think tank also suggested that city leaders should be allowed to access to the government’s £31bn National Productivity Investment Fund in order to make investments to attract businesses.