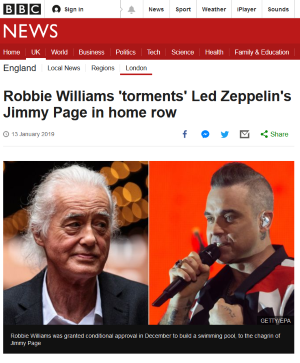 Robbie Williams is ‘blasting Black Sabbath music’ to torment his rock star neighbour Jimmy Page over their bitter home extension row, according to a complaint to their local council reported on by the BBC.

The Take That singer won a five-year battle when he was granted conditional approval last year to build a basement swimming pool at his London home. Page fears excavation work will damage his 1875 Grade-I listed mansion. Williams is also said to be imitating Page’s former bandmate Robert Plant.

A letter to the Royal Borough of Kensington and Chelsea states that as well as Sabbath, the singer has been playing Pink Floyd and Deep Purple songs at high volume, as ‘he knows this upsets’ the 75-year-old Led Zeppelin guitarist, who has lived at Tower House for more than 46 years. The two stars live next door to each other in Holland Park – Williams’s Grade II-listed home used to belong to film director and restaurant critic Michael Winner.…

Tower House’s history: Designed and built between 1875 and 1881 by William Burges, seen as one of the greatest Victorian architects. His designs were inspired by medieval England. Tower House became Grade I listed in 1949. It was previously owned by Lady Jane Turnbull and actor Richard Harris before Page bought it in 1972, allegedly outbidding David Bowie. It is opulently decorated with each room having a specific theme

Page has meticulously conserved all of the original features, according to a Guardian profile on the house

In December, planning permission for the extension to be built was granted to 44-year-old Williams. However, work cannot begin on his Kensington home until councillors receive reassurance that vibration levels and ground movement issues will be monitored. They will also decide whether to ask Williams for a bond, which could be forfeited if those conditions were breached or if any damage is done to Page’s property. Representatives for Williams previously said any construction work would fall within stringent regulations and any effects on surrounding properties would be ‘negligible’. Publicists for both stars have been approached for comment.