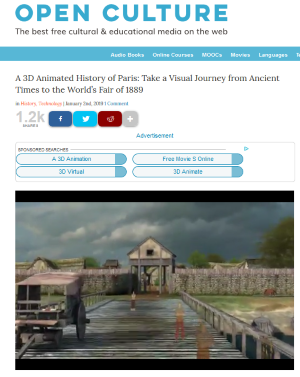 A 3D Animated History of Paris made over two years with input from many experts on the history of Paris: Take a Visual Journey from Ancient Times to the World’s Fair of 1889.

‘And this too,’ muses Marlow as he floats down the Thames in Joseph Conrad’s Heart of Darkness, ‘has been one of the dark places on earth.’ Whole theses have been written on the meaning of this statement. We can simply take it to mean that before London was London, it was just another obscure, humble town of ordinary farmers and artisans. That is, before the Romans came. So too Paris. One of the world’s most famous cities got its start as a cluster of humble huts, walled compounds, and low, wooden buildings with thatched roofs and fenced-in pastures—the settlement of a Celtic tribe known as the Parisii, who began inhabiting the region sometime in the 3rd century, BCE. In the first century, the Romans conquered and settled what would become the Left Bank, and began to build an impressive, prosperous city with a forum, temples, bathhouses, and theaters.’

‘The Roman town was first called Lutetia (or Luticia Parisiorum) and the central forum, in French, the Forum de Lutèce. Christianity came in the 3rd century, supposedly by way of Saint Denis, whom the Romans beheaded on the hill later known as Mons Martyrum (“Hill of the Martyrs”)—later still, Montmartre. Then came the Franks in the 5th century, establishing the Merovingian dynasty under Clovis in 508 and bringing with them Frankish speech, and later the Francien dialect of Île-de-France….

The rest—in broad outline or fine detail—you may know…

The project ‘required the work of over 40 people, including numerous experts about Paris’s history, for more than two years.’ By 2013, it covered the city’s ’18,000 listed monuments’ with a website, free iPad app, and augmented reality book. Unfortunately, the features of its web application seem to have been disabled and its app seems unavailable, at least in the U.S. Still—like the virtual 3d videos of Rome we’ve featured recently—the promo video above offers some impressive, beautifully-rendered reconstructions of the city one-thousand, fifteen hundred, and over two thousand years ago.