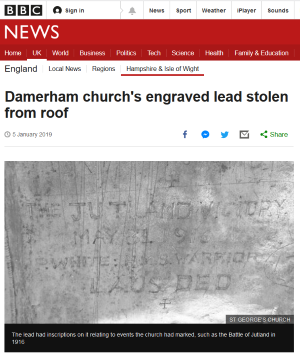 Lead with inscriptions dating to the 18th Century has been stolen from a church in the New Forest after thieves climbed 35ft (10m) up the bell tower of St George’s Church in Damerham to steal the lead sometime after New Year’s Eve.

Reverend Les Player said events the church had marked had been etched on the lead.

Mr Player said: ‘It’s a tragic loss, because it’s been there a long time and people have recorded events on it.

‘It’s been a part of the church’s story.’

Church services will continue as normal but bell ringing may be affected as the ringing chamber is directly below where the lead was taken from….