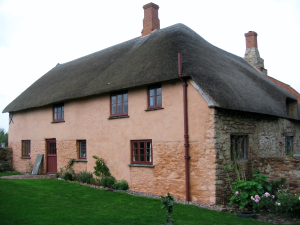 On Tuesday 13 November 2018 Historic England, in partnership with IHBC South West Branch and the Devon & Somerset Fire & Rescue Service (DSFRS) held a free IHBC CPD-recognised seminar on ‘Reducing risk of fire in thatched buildings’ at the Fire Service headquarters near Exeter in Devon, and lead organiser Alison Henry of Historic England (HE) has reported on the day for NewsBlog readers.

This was the first in a series of outreach events to disseminate the results of recent research into causes of fire in thatched buildings fitted with a wood-burning stove, funded by Historic England and NFU Mutual and undertaken by the Fire Protection Association (FPA).

The seminar presented the issue of thatch fire from various perspectives. Tackling thatch fires uses a disproportionate amount of fire service resources, and the DSFRS have set themselves the ambitious target of reducing thatch fires by 25% in the next 12 months. Similarly, insurance companies are keen to reduce the cost of dealing with claims in the aftermath of a thatch, which typically take twice as long to settle and are more expensive than for fires in other building types. As well as the personal financial and emotional cost of a thatch fire to the building owner, there is also a heritage cost, since historic fabric that has been destroyed is lost forever.

As a result of the research the FPA has developed a suite of measures which, taken together, can reduce the risk of fires occurring as a result of using a wood burner, and these were presented at the seminar. However, as Dr Jim Glocking of the FPA said ‘We’ve got to face the unwelcome fact that the only way to eliminate the risk posed by a wood burner to a thatched roof is to not use it. Having carried out the research I had no hesitation in removing my wood-burning stove and I now rely on gas and electricity to heat my thatched home.’

The event concluded with a demonstration by DSFRS of tackling a thatch fire blaze using compressed air foam. They highlighted the risk to thatch posed by hot works in or near a roof by igniting it using a DIY hot-air gun, of the sort typically used for removing paint from fascia boards!

The day was attended by over 50 delegates including thatchers, conservation officers, fire fighters, surveyors, building control officers, architects, thatched building owners and insurance professionals, all committed to reducing the number of thatched buildings lost to fire. More events are planned in the New Year.