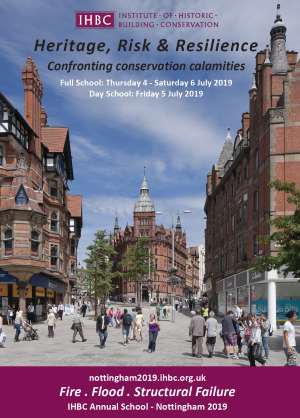 The Belfast Telegraph has reported on ongoing investigations into a suspicious fire the C-listed Central Hotel in Scotland’s Annan, Dumfries and Galloway, in yet another case highlighting the relevance of the IHBC’s 2019 School in Nottingham, on ‘Heritage, Risk and Resilience’, to current practice priorities for IHBC members and colleagues.

Police are investigating a suspicious fire that tore through a historic hotel building. Emergency services were called to the Central Hotel in Annan, Dumfries and Galloway, at 5pm on Sunday. Firefighters extinguished the blaze, which caused damage to the C-listed property. A joint investigation between police and the fire service will take place once the disused building is deemed safe.

Constable Alison Wallace said: ‘The Central Hotel has been empty for a long time now and police have, over the years, dealt with a number of incidents relating to young people entering the building and causing damage. We want to hear from anyone who may have been in the area of the hotel on Sunday afternoon is they saw or heard anything suspicious…’

She added a report was received about a window being smashed from the inside the building at around 3.15pm on Saturday….