IHBC’s ‘Heritage from the doorstep’: Local Stop The Rot media and sector campaign could trigger success for community-backed Grimsby ‘turnaround’ 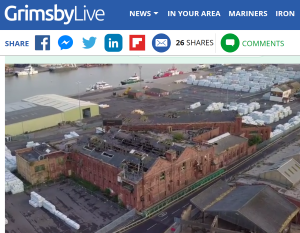 Authorities and the public have declared support for Grimsby Live’s own ‘Stop The Rot ‘campaign, which could trigger a ‘turnaround moment’ for Grimsby’s heritage, as Marcus Binney, executive president of SAVE Britain’s Heritage led the launch.

Just 24 hours in, our Stop The Rot campaign has attracted a vote of confidence for the future of our town’s crumbling buildings. Conservationists, North East Lincolnshire Council, politicians and the public are united in their hope that our past can be salvaged before it is too late. We launched our Stop The Rot watch list at dawn yesterday – and by midday, we had received a flurry of support, almost 300 of you joined our group on Facebook and Grimsby’s history was a talking point in the town.

Marcus Binney, executive president of Save Britain’s Heritage, declared the launch, which featured drone footage of some of the town’s derelict and abandoned sites, as a ‘turnaround moment’ for Grimsby’s heritage with authorities and investors poised to make a difference. He said:

‘We are supportive of Grimsby and its glorious heritage. Some of really is in a sad state but there are amazing opportunities here. Once the greatest fishing port in the British Isles, Grimsby has had a terrible decline. It has been a desperate situation for a long time but we really do feel this is a turnaround moment. Public bodies and investors are coming together to try and make something of its heritage. It will lead to a revival. The candle is still burning. The Grimsby spirit will shine through. It can really come back again.’

Elsewhere, there were pledges of support from politicians. Cleethorpes MP Martin Vickers pledged to work with agencies to carry out its aims. Mr Vickers said: ‘Sadly many of these are in need of extensive work if, as I would hope, they are to be preserved.’ He added: ‘It’s important that we get the balance right between the need to move forward and show that we are determined to attract investment but we must hold onto the best of the past.’

Stop The Rot is seeking to salvage the best of our history before it is too late, with our focus on an specially-compiled list of 33 buildings, structures and areas urgently in need of help. Reacting to our launch, the list’s biggest landlord, North East Lincolnshire Council, said it was fully behind any effort to protect the town’s rich heritage. Executive member for regeneration Councillor Peter Wheatley said: ‘We’re glad to see the Telegraph put its weight behind a building restoration plan. This is an admirable project, and we hope that as part of it the Telegraph highlights the great work already being done by the Council and other organisations and individuals to preserve our borough’s heritage for the future. Building and structure owners should be responsible owners, and that’s what we’re trying to do with these schemes and others already underway.’

Anna Shelley, from the Victorian Society, said she also backed our campaign: ‘Three of the buildings in particular have featured on our own Top 10 Endangered Buildings list over the years – Victoria Mills in 2016, the buildings on Eleanor Street in 2013 and the Ice Factory in 2010. These buildings, and the many more highlighted in the campaign, tell a fascinating story of Grimsby’s social and industrial heritage and should stand as the pride of the town. Instead, neglect has branded them as ‘eye-sores’ and now they are at risk from complete dilapidation and harmful planning applications, including the as-yet decided plans to demolish much of the buildings on Eleanor Street.’

Historic England planning director Louise Brennan said our focus on heritage could kick-start wider regeneration. She said: ‘Grimsby has some fine historic buildings. We believe that even those that are at risk and appear unloved can ultimately make a great contribution to the character and economy of the town. The role of heritage in spurring regeneration has been crucial in many places up and down the country. Historic England is demonstrating its support for Grimsby through the Heritage Action Zone initiative. We are confident that many of the buildings currently seen as problems can become great opportunities in Grimsby’s future.’