IHBC’s ‘heritage from the doorstep’: Listing of Lido diving platform in Gloucestershire celebrated 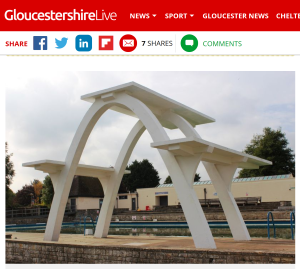 A diving platform at the Lido in Stratford Park in Stroud, Gloucestershire has been granted Grade II listed status following one of the busiest summers yet, in another local heritage success celebrated by Gloucestershire Live.

The diving platform at the lido in Stratford Park in Stroud has been granted Grade II listed status following one of its busiest summers in recent years.  It is one of only four inter-war concrete diving platforms known to survive in England, and was the only one which was not listed.

The 10-metre high diving platform is in the form of a parabolic arch with three diving platforms. Following changes in safety regulations 17 years ago it was taken out of use. Historic England’s report stated that: ‘In addition to its rarity, the diving platform is of clear architectural interest for its elegant form and sculptural use of reinforced concrete, and it forms a striking feature of the lido.’

In 2017 a group of local volunteers was awarded a £10,000 National Lottery grant from the Heritage Lottery Fund (HLF) and Stroud Town Council which was used to undertake a feasibility study to help shape future applications for funding to update the pool and its facilities.

Councillor Mattie Ross, chair of the Community Services and Licensing Committee, added: ‘This is welcome news which should boost efforts by both Stroud District Council and the Lido Project Team to improve this facility.’

Stroud Urban District Council commissioned the building of the lido which was built in 1937 by the council’s engineer and surveyor FS Cutler at a cost of around £20,000. It is managed by SLM Leisure, along with Stratford Park Leisure Centre.