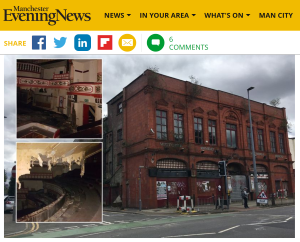 The Victoria Theatre on Great Clowes Street was once home to the stars before becoming an entertainment hub but is now in a derelict state, the Manchester Evening News reports, although, ‘despite being falling into major disrepair, the historic building remains frozen in time.’

Incredible photos show the inside of a now derelict theatre and bingo hall which was once the hub of the community in Salford. The Victoria Theatre dates back to 1899 when the foundation stone laid was laid by legendary Victorian-era actor Sir Henry Irving and his pal Bram Stoker, author of Dracula. It was opened a year in October 1900, it was showing motion pictures by 1901 and it was granted a cinema licence in 1913.

Despite stints being used for live theatre it remained as a picturehouse showing the latest releases from 1919 up until the 1950s… it was permanently opened as a Bingo Hall in the 1980s and provided daily entertainment for thousands until it closed again in 2007. It is currently lying derelict…

Photographer Rachella Bella managed to gain access to the historic building on Great Clowes Street on the banks of the Irwell in Lower Broughton along with urban explorer Lucy Clarke, who runs the Facebook group ‘Exploring with Pinkzy.’ And their pictures show how, despite being falling into major disrepair, the historic building remains frozen in time. The ceilings can be seen crumbling and the once lush read seats dusty and faded. An old microphone, packet of cigarettes, a bottle of Watneys Ale as well as vintage light fittings and switches are among the fascinating items captured during the pair’s tour of the building.

In recent years, a campaign has been launched to save the theatre, which has a ‘for sale’ sign up outside, and bring it back to life. The theatre was up for auction last week, but failed to sell – but the auctioneers have confirmed that it was sold over the weekend. A petition launched to save it says ‘it is likely to be developed or demolished’ and has so far been signed by more than 1,000 people…

The Theatre’s Trust, who have also campaigned for it to be revived, say: ‘The theatre is constructed in red terracotta…’