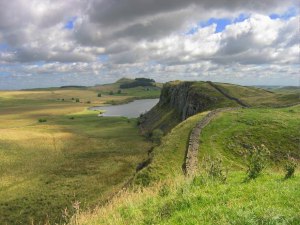 Stretching from one side of the country to the other, Hadrian’s Wall in northern England and the Antonine Wall in central Scotland are to benefit from over £2million of National Lottery funding.

Both UNESCO World Heritage Sites, these impressive ancient barriers will bring the people along their lengths together to preserve the walls’ fragile remains and explore the incredible Roman history associated with them.

Hadrian’s Wall: A National Lottery grant of £1.17m will allow experts at Newcastle University to work with community volunteers to help protect, preserve and interpret Hadrian’s Wall. The ancient wall is currently at risk from modern threats such as severe weather, tourism and invasive plant species.

Ros Kerslake, CEO of HLF said: ‘What were once built as barriers will now bring communities together to explore and celebrate their shared heritage.’

A fun initiative, Where is our Wall?, will encourage people to solve the mystery of the missing stones from Hadrian’s Wall. Over 1,500 years, stone quarried by the Romans has been taken to build local houses, farms, field walls, churches and castles. Using the latest digital and scientific techniques, communities will help uncover the stones and discover how Hadrian’s Wall has been used to shape the landscape around them.

Antonine Wall: The Antonine Wall in Scotland briefly marked the northernmost point of the Roman Empire and although it’s not built of stone, its impact on the landscape was immense. Thanks to National Lottery players, funding of £980,600 will help address the lack of awareness of this 63km-long World Heritage Site, particularly among young people.

Replica distance markers, based on the Roman originals, and five Roman play areas for children will be created. Led by a 21st-century legion of 300 volunteers, there will be a programme of 30 community-designed projects, such as a Scouts Big Roman Camp Out and a Roman-inspired community garden, across the five local authorities that the wall passes through. Resources for schools exploring topics such as Roman cooking and crafts will be developed as well as talks, tours and a community-led remake of the 1950s Walk the Wall film.