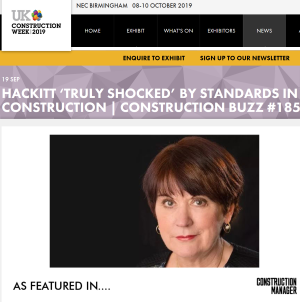 Dame Judith Hackitt has told a conference she was ‘truly shocked’ by standards in the construction industry when researching her report – the ‘Independent Review of Building Regulations and Fire Safety’ – and called for ‘stronger powers of enforcement, to provide more deterrent to cost-cutting’.

[Hackitt] also warned that another ‘catastrophic event’ cannot be ruled out if regulatory changes aren’t made. Hackitt was speaking at IOSH 2018, the Institution of Occupational Safety and Health’s annual international conference. She told delegates that she encountered construction companies trying to do things as cheaply as possible rather than worrying about quality when she embarked on her review after last year’s Grenfell Tower disaster. She added that it was vital a culture change was implemented as soon as possible while Grenfell was still fresh in people’s minds.

Hackitt said: ‘When I looked from the outside into standards in the built environment, what I encountered was truly shocking. The system for fire safety in high-rise and complex buildings was weak and ineffective. People actually said things like ‘we always knew something like this would happen’. They knew the system wasn’t working but didn’t know how to fix it. There was a race to the bottom. Companies were looking to do things as cheap as possible, getting around the rules. It was about cost, not quality. Unless we fix the system, we have no way of guaranteeing that there won’t be another catastrophic event.’

‘We need to get to a point where people those who construct a building are as responsible for those who use it over the next ten or 20 years as they are employee safety. What we are calling for is collaboration and joined-up thinking across the built environment sector, not self-interested groups protecting their own turf, something I have seen a lot of.’

Hackitt said some industry groups and the government are already looking at how to implement some of the measures recommended in her final report, including bringing together bodies such as the Health and Safety Executive, local authority building control and fire and rescue authorities and having the same risk-based approach as there is across other industries. But there also needed to be stronger powers of enforcement, to provide more deterrent to cost-cutting, she added.

‘Right now, the level of penalties when people are caught out is not strong enough,’ she said. ‘There is no deterrent. We also need a system where people can raise concerns in the knowledge they will be acted on. The same goes for within industry, for example we don’t want people thinking they don’t know who to tell if there are concerns.’