IHBC’s ‘heritage from the doorstep’: Nando’s plans to replace historic East London library with restaurant blasted as an ‘abomination’ 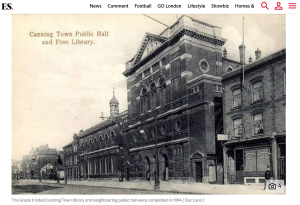 The Standard has highlighted civic concerns about how Grade II listed Canning former public library in London’s East End – that hosted political speakers such as Keir Hardie and Sylvia Pankhurst , and gave birth to one of Britain’s biggest trade unions – is set to become a Nando’s, as the local Labour party argues that it is historically important and should remain open to the community.

The chicken restaurant chain has applied to transform the ground floor of Canning Town Library into a restaurant, with a dining area outside and illuminated signage at the front. Residents in the area have described the plans as an ‘abomination’.

The Grade II listed library and neighbouring public hall were completed in 1894. Trade unionist Hardie, suffragette Pankhurst and Nobel-prize winning author Bertrand Russell addressed crowds at the hall.  After a speech there in 1889 trade unionist Will Thorne formed the National Union of Gasworkers and General Labourers — now known as the GMB — and helped organise the London Dock Strike of the same year.

The Canning Town North Labour Party said the library in Barking Road is historically important and should remain open to the community. A spokesman said: ‘The library’s a Grade II listed building owned by the council and used as a public library since around 1894. We aren’t against Nando’s as such; we simply believe that the proposal is in the wrong place and should be in empty properties. It would enable the old library to continue with its original function of serving the public…’

Nando’s had applied to remove a spiral staircase in the building but dropped the plans after complaints from Historic England….

Nando’s has more than 90 restaurants in London. A spokesman said it was ‘really excited [to bring] our delicious Peri-Peri chicken to the area and creating new jobs…’