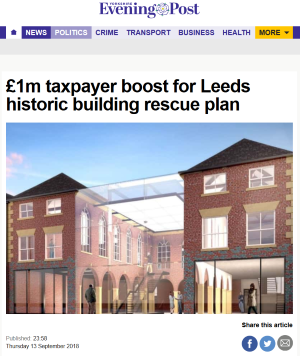 A rescue plan for one of Leeds’s oldest buildings – which is considered one of the most at risk heritage assets in the city – has been given a £1m boost from the taxpayer amid fears it is the ‘last realistic chance’ of saving it, as the Yorkshire Evening Post reports on prospects for the First White Cloth Hall – a grade II listed building dating back to 1771.

… [We] reported earlier that councillors had approved a rescue plan put forward by developer Rushbond, which already owns several interests in the historic Kirkgate area of the city centre. These include the Corn Exchange and the former Majestyk building in City Square.

However new papers seen by the YEP reveal that the restoration plan is running at a £1m ‘conservation deficit’, meaning it would be worth £1m less after restoration than the work is estimated to cost in total. It has led to the developer applying for – and getting approved – a £500,000 grant from the Heritage Lottery, from a pot put aside for the wider Lower Kirkgate Townscape Heritage Initiative.

An additional £500,000 has also been provided by Historic England, through its Buildings and Risk Repairs Grants scheme. A report just signed off by Leeds City Council’s director of city development confirms the boost, and reveals that a Manchester based firm which specialises in restoring historic buildings has been appointed…

… The report says the building has been in a ‘poor condition for a number of years’ and the previous owners were not able to bring it back into use due to the ‘considerable conservation deficit’, which now stands at more than £1m. The deficit has previously led to restoration projects being declared ‘unviable’, the report adds, and the latest intervention ‘is considered to be the building’s last realistic chance of being repaired and brought back into use’. The report stresses the building is a ‘critical’ project in the regeneration of the Kirkgate area….