IHBC’s ‘Heritage from the doorstep’: Architect ordered to tear down award winning £4.65m home in Clerkenwell 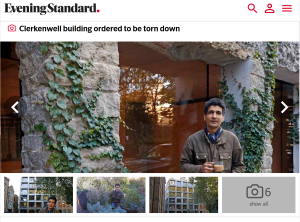 The Evening Standard has reported on how an architect, Amin Taha, has been told to demolish his six storey multi-award-winning home because officials claim it does not match plans he originally submitted.

Amin Taha, 47, has been ordered to tear down 15 Clerkenwell Close, a six-storey property where he lives with his family. The £4.65 million building, unveiled in 2016, has won two awards from the Royal Institute of British Architects (RIBA) and been hailed an ‘architectural triumph’.  But Islington council says the finished structure does not reflect what was proposed in the initial planning application in 2012.

Mr Taha, who is fighting the enforcement notice, said: ‘It’s our family home, it’s my office. My parents should be retiring and coming to live here and my sister too, but we’ve had to put it on hold because it could all be destroyed.’

After the building was unveiled, some residents and councillors complained that it was ‘ugly’. The Friends of Clerkenwell Green called for it to be flattened and it was nominated for the Carbuncle Cup, the prize run by magazine Building Design for worst building of the year.  Then, in June last year, Islington council served Mr Taha with an enforcement notice, claiming the materials, design and height of the building were not in keeping with the plans.

Mr Taha said officials were concerned he had used stone rather than brick for the facade. He insists that element of the design was approved by planners, but that the paperwork was lost.   The council issued a second enforcement notice in February which says the building’s ‘design and location’ is ‘harming the character and appearance of the local area’.  A council spokesman did not specify why the building has allegedly breached planning permission. Mr Taha said: ‘It started to snowball, from an error and mistake, into a fiasco. It’s surreal — absurd —because it was approved.’

… An Islington spokesman said: ‘After an investigation, the council has come to the view that the building at 15 Clerkenwell Close does not reflect the building that was granted planning permission and conservation area consent in 2013. In the council’s view, the existing building does not benefit from planning permission, and the council issued an enforcement notice on 26 February 2018, to take effect on 9 April 2018. The owners of the site appealed that enforcement notice on 6 April 2018, and the case will now be handled by the Planning Inspectorate.’