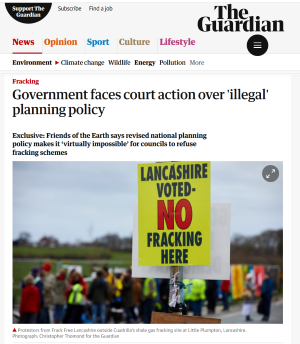 Friends of the Earth writes:

As reported in The Guardian… the government failed to carry out a strategic environmental assessment (SEA) on its new planning rules,?putting our climate and environment at risk. Through High Court action Friends of the Earth wants to force the government to undertake an SEA, consult the public and modify the framework based on those findings.

The National Planning Policy Framework, which was released on the very last day of parliament (24 July), promotes fracking, holds the door open for future coal, and makes it difficult for wind power projects to get off the ground.

Friends of the Earth is concerned that:

Harsh rules for the development of wind energy could block new schemes from coming forward.

By requiring planning authorities to plan positively for shale extraction, the approach gives the go-ahead for fracking and will make it virtually impossible for councils to refuse schemes they and their communities do not want or consider right for their area.

The new rules failed to ban coal and have kept the door open for future coal developments – whilst the ‘great weight’ of the benefits of coal to the economy is no longer an overriding factor for coal development, a new coal mine could still get the go ahead if ‘it provides national, local or community benefits which clearly outweigh its likely impacts’.

The government failed to carry out a ‘strategic environmental assessment’ of the plans; leaving the public in the dark over the major environmental impacts of the new changes, and whether less damaging alternatives have been considered and discarded (or considered at all).

Kate Gordon, Friends of the Earth senior planner, said: ‘What we build, and how we build it – from new homes to power stations – has an impact on our health, our lives and the environment around us.

‘The new planning rulebook was a chance to put an end to dirty coal, boost renewable power and energy efficiency, and put climate risks front and centre – to create a more sustainable environment for us all to enjoy.

‘Instead, the government has further threatened our already warming climate – and yet no strategic environmental assessment was ever made of the plans.’

Friends of the Earth’s Head of Legal, Will Rundle, added: ‘The government pays lip service to leaving the environment in a better state for future generations but in reality does the opposite. Publishing a new national framework for development in England without any assessment of its major environmental implications begs the question of what happened to good governance.

‘We’re taking legal action over the complete failure by the government to environmentally assess the major impacts of this new planning framework, which we think is unlawful and shows contempt for people and our planet.’

Read the full report in The Guardian