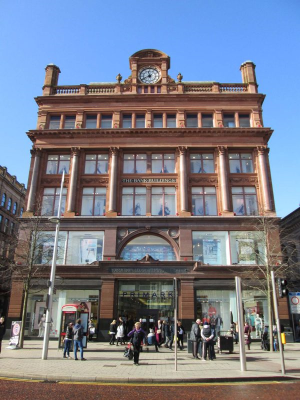 Nikki McVeigh of Ulster Architectural Heritage (UAH), the national amenity society, has criticised the lack of forward planning surrounding the Belfast Bank Buildings Fire, and in an opinion piece in the Belfast Telegraph asks ‘Why the partial destruction of Primark is just the latest in the death by a thousand cuts endured by Belfast’s built environment’, highlighting the issues faced in local heritage conservation.

… The outpouring of concern for a historic building, under threat of loss or desecration by inappropriate development, for whatever reason, is always significant. And yet the ‘death by a thousand cuts’ of Belfast’s built heritage continues unabated.

Historic buildings – and, indeed, quality in modern architecture – form the fabric of our lives: our streets, towns and cities.

Most of us recognise the importance of these buildings and share the perception that, because historic buildings are important, perhaps even protected, they will always be there.

With a good number of buildings, due to the care and enthusiasm of many private owners and some protection afforded by listing, this is the case.

However, loss of historic buildings, both accidental and otherwise, continues at a disturbing rate – particularly in Belfast, but also across the whole of Northern Ireland….

… With every building threatened or demolished, accidentally or otherwise, we awaken more to the reality of Northern Ireland’s unrelenting, cumulative loss.

To widespread horror, Belfast suffered the still-unexplained weekend demolition of three buildings earmarked for imminent listing and other unlisted, but significant historic warehouses on and around Upper North Street in late-2016.

Other listed buildings throughout our city centre – the former Bank of Ireland in Royal Avenue, the former Assembly Rooms and, more recently, the Masonic Halls on Rosemary Street – lie land-banked for speculative development, with The Orpheus and Metropole gone – despite massive public concern.

In this more general context it is not surprising that the people of Belfast are taking stock of what their city, their historic environment, means to them and how it may, or might, have been better protected.

Ten days after the Bank Buildings fire it appears that there is still no plan, either to address the plight of traders, or to assure the future of the B1 listed building.

Ulster Architectural Heritage (UAH) has observed that the worst damaged front elevations of Bank Buildings not only retain much of their stonework detailing but are visually square and perpendicular, with the main lateral horizontal steel beams straight and intact. These effectively make the building a box, as it was originally designed, and, as such, inherently stable. Accordingly, UAH believes that there is good reason to hope that the building can be saved.

However, the immediate and urgent issues are threefold:

Safety: Industry practice would be to erect an exterior shoring of scaffolding, very similar to the structure erected to support the exterior of the nearby Athletic Stores when all its interior walls and roof structure were removed. This also serves the UAH aim of preserving the shell for future restoration. Similar support structures can be, and have been, built in short order.

Restoring Pedestrian Access: While support shoring is being built, placing ‘hardened’ pedestrian walkways, again, common practice in the construction industry, would restore four way access to, and through, Castle Junction. Again, quick to construct, and although not attractive, as a very short term measure, they would open the thoroughfare and access to businesses until the shoring was complete and the roads opened, probably with an unavoidable width restriction.

Retail Footfall: This is essential to retain customer base for traders and it must be supposed, particularly for Primark. The optimum solution which presents would be to accelerate the commissioning of Primark’s £30m extension to the rear of the bank buildings and recommence Primark trading essentially on the same site.

While all this reflects common industry practice and may appear obvious, nothing will happen without a plan and its initiation by decision makers, presumably primarily Belfast City Council, Primark and the Department of Communities, Historic Environment Division.  UAH is encouraged by the news that experienced staff from Glasgow City Council were on site today to assist and advise on the managing of their much larger scale challenges following the twin fires at the Charles Rennie Mackintosh School of Art. Glasgow City Council and the Academic Management of the School were quick to coordinate remedial actions and provide a daily progress report via a webpage.

Whilst differently focused, UAH fully shares the traders’ concerns. However, an overreaction on the part of Decision makers in response to kneejerk pleas for demolition, resulting in the irretrievable loss of the Bank Buildings and one of Belfast streets’ most striking long views, would amount to an act of officially sanctioned vandalism.