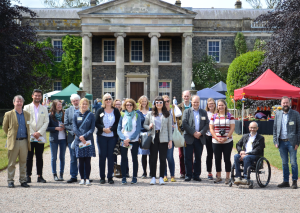 The IHBC’s 2018 Annual School was well attended by practitioners from the Republic of Ireland – not least because of ongoing research linked to the institute’s own Branch priorities – while offering his personal and professional take on the experience is Tom Cassidy, member and founding Chairperson of Ireland’s Association of Architectural Conservation Officers (A.A.C.O.) and Architectural Conservation Officer with Limerick City and County Council.

In early February two copies of the November 2017 issue of the Institute of Historic Building Conservation’s journal Context arrived to my desk in the Dooradoyle offices of Limerick City and County Council.   Contained within a Dublin postmarked envelope, other than a number of flyers enclosed with each copy, one promoting membership of the Institute and another advertising the Annual School scheduled for June 21 to 23 in Belfast, there was nothing to indicate by whom the missive had been dispatched.

I hurriedly marked it ‘I.H.B.C. Material’, set it aside, and returned to the work of assessing grant applications and divvying up the limited funds available amongst the qualifying projects.  Leaving the office towards the end of February for scheduled surgery and consequential extended recuperation period, I made sure that the envelope and contents made it into the bundle of papers and material I was taking with me to keep me occupied while convalescing and, on reaching home, put it away safely and promptly forgot about it- assisted (no doubt) by the effects of the anaesthesia administered the following day.

While I did manage, through emails to my personal account, to keep abreast of the activities of the Association of Architectural Conservation Officers (A.A.C.O.) during my recovery, it was not until my return to the office at the beginning of May that the Belfast event came back to mind, through the sterling work of the association’s officer board frequently circulating information on behalf of the I.H.B.C.  Having decided that the theme, topics, and headline speakers, as gleaned from the circulated material, were ideally suited to a location like Belfast, I advised my line manager and senior manager of my wish to attend on my return to work.

Thereafter, the task of putting together a formal request to attend a conference outside the Irish Republic’s jurisdiction began.   Generally a detailed Memo, with the conference programme attached, must be prepared in order to obtain authorisation to attend any event outside the local authority functional area.  Usually signed off by the senior manager, for travel outside the country the relevant Director of Services must recommend attendance, and sanction given by the Chief Executive.  A degree of frustration arose owing to the inability to download, off the Institute’s website, a full programme of tours, speakers, topics, and so forth.  Conference organisers please note.  However, approval was obtained and the process of making a foreign currency payment put in train.

While the contents of the preceding paragraph may appear unnecessary, the substance is needed to illustrate the sort of impediments that many potential members of the Institute from Ireland (Éire) could face if they wish to play an active, supported, role in the organisation.  Fortunately, and clearly, this did not apply in this instance.

And so to Belfast- a city first visited by me during university days, as a member of the Association of Young Irish Archaeologists, and often, though not frequently, since.  Travel by train, tram, and train again, saw me departing Limerick at 08.55 and arrival at the first venue at 14.00 in time for the Thursday Tours- though I had not booked to participate owing to Irish Rail’s advice to allow a full hour for travel between Dublin Heuston and Dublin Connolly mainline railway stations.  In fact less than twenty minutes sufficed.

Friday’s presentations and talks ran like clockwork, with very little deviation from the set timetabling.  And for a person from, technically, a foreign country it was interesting to hear mention of the ‘Decade of Centenaries’ (http://www.decadeofcentenaries.com/) which is all-embracing of our differing traditions and shared histories on the island of Ireland and is just over half way through the relevant time span.  On a more personal note, there was also passing mention of Ballykinlar, Co. Down.  Here, during the Irish War of Independence, a major internment camp was run by the British authorities where hundreds of members of the Old I.R.A. were incarcerated in the period 1920-22- one being a grand-uncle of mine.

Comments from the podium, and general discussion throughout the three days, revealed concerns about the general state of architectural conservation in the U.K., with one particular presentation, by Mona O’Rourke, based on research she is undertaking on behalf of the Institute, focussed on the plight facing Irish conservation specialists at local level.  Even for one, in the role since year one of the protected structures legislation, the facts set out in respect of numbers on the ground were sobering. While the vast majority of us are one-person-operators (many with no clerical or other supports) to see that over 40% of local authorities in Southern Ireland have no conservation expertise on their payroll is staggering.

Personally, I welcome the I.H.B.C.’s interest in the role and work of the conservation officer in his / her local authority in the Republic, and hope that the Institute can assist in bringing about a less bleak situation.  An area for future study could be an analysis of the benefits of adequate funding to meet the obligations entered into when Ireland signed and ratified the Council of Europe’s Convention for the Protection of the Architectural Heritage of Europe (The Granada Convention). By contrast, the effects of the virtual wipeout of funding mechanisms for owners and occupiers of our built heritage also requires examination.

The financial crisis in the Republic led to the loss of national schemes such as: Buildings at Risk, and the Significant Places of Public Worship (both operated by the Heritage Council); Civic Structures Grant Scheme (targeted at buildings and facilities owned by state authorities, community groups, charities, and so forth); and the Local Authority Conservation Grant Scheme funded by the Exchequer but run by the members of A.A.C.O.  To allow full restoration of meaningful grants to the custodians of the Republic’s built heritage a ball park figure increasingly mentioned is €50m. per annum.  Less than €3,000,000 has been allocated by central government to two grossly under-funded, and grossly over-subscribed, aids for 2018.

Some of the glories of Belfast’s architectural heritage featured prominently throughout the school- each with its own resonances of shared history.  In the Lanyon Hall, Queen’s University, Belfast, the noted conservation architect Dawson Stelfox formally launched the School in his capacity as Deputy Lord Lieutenant of Belfast. As well as overseeing works at Queen’s in the past, he has recently been involved in a major project in my own area where some €25,000,000 of conservation and restoration work at Adare Manor was covered by Declarations issued by the Council, rather than through the planning permission process. The opportunity to exchange thoughts and compare projects was not missed.  We were surrounded by portraits of distinguished academics and noted alumni- more than one reflecting ‘Our Shared Heritage’.  An example being a painting of Mary McAleese, who was born in North Belfast and served as 8th President of Ireland following a stint as Professor of Law at Trinity College, Dublin.  In City Hall a practical example of the results of communication, negotiation, and transformation was seen.  Deirdre Hargey, the newly elected, Sinn Féin, Lord Mayor welcomed us to the conference dinner in a building once seen as a monument to the supremacy of Unionism.

The Saturday Tours were eclectic in choice and destinations.  I opted for the Ards Peninsula and found further insights to our islands’ shared history. At Mount Stewart, former home of the Lords Londonderry, the recently completed conservation works were detailed as we moved through the rooms.  Interpretation panels at ground floor level provided certain information, but when the bedrooms were reached the broad circles in which the family moved were revealed.  Despite being a staunch Conservative and Unionist family and active as such in British politics, one name card set into a brass holder told of Ramsey McDonald, first Labour Prime Minister of the United Kingdom, being a guest there.  Further along the corridor another card revealed that another visitor had been Lady Lavery, a woman sympathetic to the Irish cause who hosted the Irish Delegation in London during the Treaty negotiations in late 1921.  Her Belfast-born husband, Sir John (an official WWI war artist), painted several iconic images and portraits recording events from the fight for Irish freedom and the subsequent, tragic, Civil War. Lady Lavery’s image, either directly or through watermarks, graced the first three series of bank notes issued by the independent Irish State.

Thereafter, it was on to Portaferry where our guide, Philippa Martin, brought us to several examples of recent conservation work, including projects aimed at reducing levels of dereliction and vacancy.  All relevant to a person seeking to achieve the same objectives in Europe’s most westerly red-brick Georgian city.  During the course of the day, incidentally, chatting with Jonathan Taylor recalled the I.H.B.C. envelope previously mentioned- and subsequently retrieved from its place of safety at home.  Then back to Belfast to connect, in good time, with the 16.00 train to Dublin and points west.

Networking discussions revealed precisely how formulaic the annual I.H.B.C. school is- which is no bad thing in its own right.  However, this may generate its own issues- as organisers, members, and regular attendees, are so familiar with the format that, perhaps, it is felt that full information need not be placed in the public domain.  However, this may discourage would-be conference goers who require fuller material to either inform their decision-making, or permit their attendance.

While I enjoyed the overall event, and found it to be of benefit, I have to confess to a certain chagrin that developed over the duration of the School and since.  This arose through encounters with the members of the next generation of Irish conservation experts who were driven from our shores by the fallout from the financial crisis. While it was wonderful to talk, and catch-up, it is clear that Ireland’s loss of these single-minded and ambitious knowledgeable people has been Britain’s gain.  Hopefully positions will start to be advertised by Irish local authorities, government departments, and agencies in the near future and that they will be willing to return with enhanced C.V.s to contribute their knowledge and expertise at local and national level.

As for me, I’ll be back for further Annual Schools.  Knowing that there is much to be learnt, and willing to contribute- even if only from the floor.

This text is reproduced verbatim courtesy of Tom, and an edited version of the paper will appear in the IHBC’s 2018 School issue of Context, in September.

As ever, themed issues of Context also include more general conservation articles as well as news, book reviews and reports from IHBC’s officers.

For more on the School see the IHBC‘s NewsBlogs and belfast2018.ihbc.org.uk

For more on IHBC Schools, past, present and future, see the website