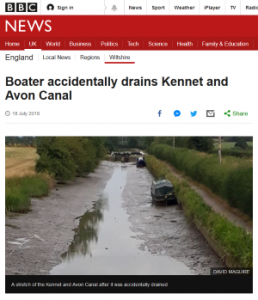 A section of the waterway was left with hardly any water on Tuesday near the Barge Inn in Seend, Wiltshire.

A spokesperson for the Canal and River Trust confirmed what happened was not malicious but that the boater was ‘rushing and left the paddles up’.

The lock paddles ‘work like a plug on a bath in allowing water in and out of the locks,’ he explained.

He added that the trust had since restored the water levels.