IHBC’s ‘Heritage IMHO’, from the Spectator: ‘The problem with British mosques’ 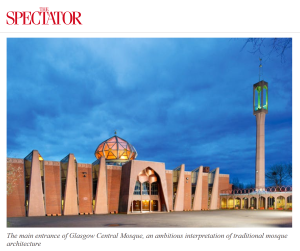 The incongruent architecture, cultural baggage and gender inequality must go, argues Ed Husain in his Spectator review of Shahed Saleem’s ‘The British Mosque: An Architectural and Social History’, as he explains why these mosques need to adapt to the reality of the modern West.

Ed Husain writes in The Spectator:

My earliest memory of a mosque is being with my father in London’s Brick Lane Mosque. He was a member of its management committee and that gave me, an infant, the right to roam freely the four floors — including its vast basement — as I waited for him to finish meetings. I remember seeing Hebrew writing on a plaque on the top floor. There were mezuzahs on doors, respectfully preserved by the Muslim elders. I played with my brother on the second floor amid the dusty ebony pews left over from the mosque’s days as a French Huguenot church. European Judaism, Christianity and Islam were woven into the historical fabric of Brick Lane Mosque.

At weekends, I learned how to recite the Quran in Brick Lane. On special occasions, such as the annual remembrance of the birthday of the Prophet Mohammed, the Mawlid al-Nabi, we children loved the heartfelt collective singing of rhythmic Arabic odes with our Bengali elders. The powerful unison of melodious voices, with incense burning in the air, and the aroma of food waiting, Indian biryani dishes sent to the mosque by our mothers. But politics and puberty ended that pluralistic peace.

Architect Shahed Saleem’s marvellous ‘The British Mosque: An Architectural and Social History’, published by the public body Historic England, an arm of English Heritage, is an indispensable guide to Britain’s approximately 1,300 mosques. ‘We shape our buildings; thereafter they shape us,’ said Winston Churchill……

There are signs of change. In Harrow, the ‘Meeting Place’ (rather than ‘mosque’) is a fluid, wave-like building filled with light. In Cambridge, a new mosque is being built where the architects will ‘synthesise the essential application of geometry with Islamic and English heritage’. The focus is inward-facing, with courtyards and the building as a calm oasis. Both Cambridge and Harrow are radical reinterpretations of Muslim spaces and bear none of the old hallmarks of domes, minarets and pointed arches.

Ed Husain is the author of The House of Islam: A Global History’ (Bloomsbury, 2018).

The British Mosque: An Architectural and Social History by Shahed Saleem is published by Historic England.