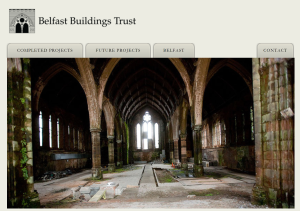 The BBC has featured the recent rise in fortunes of Belfast’s Carlisle Memorial Methodist Church, of 1875 – designed by W.H. Lynn, a one-time partner of the more familiar Charles Lanyon – which is also a case study included the IHBC 2018 School’s Thursday tour options, led by Shane Quinn of the Belfast Buildings Trust.

For 143 years, the exclamation point of Carlisle Memorial Methodist Church’s spire has punctuated the skyline between the communities of north Belfast and the city centre.

Its enduring, defiant appeal will be on full display when the Prince of Wales and Duchess of Cornwall visit as part of a two-day trip to Northern Ireland.

But, beyond the striking gothic revival arches, is a story of a church brought back from the brink of total ruin, a remarkable renaissance that has been 10 years in the making.

‘There’s light at the end of the tunnel,’ says Shane Quinn, from Belfast Buildings Trust, which acquired the church in 2011 after launching a major campaign in 2008 to promote its regeneration.

Just six years ago, he said, an engineer reported that the church was dangerous, its roof ready to collapse.

But, in 2015, phase one of the church’s regeneration allowed it to be reopened to the community.

It has since played host to events such as beer festivals, concerts and even performances of a specially-written musical history of the city – The Belfast Opera.

Now, the trust is looking to the future – the announcement of a long-term tenant to take on the building should be made by the end of this year.

‘The building has already been saved,’ said Shane. ‘Big historical building projects always take time. So we’re very pleased to be actually exploring what will happen in the future.’…

‘Perhaps one day you could see weddings and all sorts of community events happening, so there’ll be a mixed use. But there’ll also be a core tenant and a core purpose.

‘What happens to the building in the long term will be determined by the community.

‘It’s been a big project and like all big projects it’s two steps forward and one step back. But it’s wonderful to get to this point.

‘The church was a gift to north Belfast and we want it to fit that purpose.’

TO BOOK the 2018 School just follow the School’s homepage at belfast2018.ihbc.org.ukand other booking links, or go direct:

For more background on the School see the NewsBlog

For all and more on the IHBC’s 2018 Belfast School see belfast2018.ihbc.org.uk