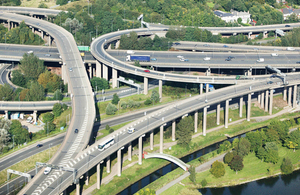 Music mogul and award-winning chef celebrities joined forces with Highways England today to pay tribute to and celebrate the feat of engineering that is one of England’s best known landmarks.

This June sees the 50th anniversary of work starting to build Spaghetti Junction – the amazing Midlands road structure, used daily by tens of thousands of people travelling in and out of Birmingham, and through the region to go up and down the country. In a video released today by the Government company, celebrities line up to sing the praises of Spaghetti Junction, officially named Gravelly Hill Interchange.

Every day radio shows broadcast Highways England traffic news to listeners wanting up to the minute information about what is happening on the roads. Radio presenter Ed James from Heart FM’s breakfast said he thought the road was ‘iconic’ while Tim Warwood from Free Radio said:

‘It is amazing because as a kid whenever I went out with my parents, they’d be like, look its Spaghetti Junction. It is amazing.’

The launch of the video coincides with the UK currently facing a shortfall of 20,000 engineering graduates a year, with half of companies in the sector saying this has a significant impact on productivity and growth.

By bringing young people face to face with engineering experiences and role models, the Year of Engineering campaign aims to showcase the creativity and innovation of engineering careers and widen the pool of young people from all backgrounds who are willing to consider the profession, diversifying a workforce that is 91% male and 94% white.

Highways England Customer Service Director, Melanie Clarke said: ‘This special video is a fitting tribute to the famous structure and clearly captures the pride that the people of Birmingham and those that use it every day continue to hold for the road. When it was designed 50 years ago nobody could have predicted that the anniversary of work starting on the road would coincide with the Year of Engineering and there is no better tribute to the role of engineering than Spaghetti Junction.’

The strategic road network in England connects businesses, families and friends. Yet the country needs more of the people that build them. At Highways England we’re backing the Year of Engineering campaign and appealing to young people to consider engineering as a rewarding career. HM Government Envoy for the Year of Engineering, Stephen Metcalfe MP, said: ’The Year of Engineering is a chance to show young people from all backgrounds the amazing things they could achieve as engineers, so it’s fantastic to be celebrating 50 years of one of the UK’s most iconic engineering feats. Spaghetti Junction is a great example of how engineering transforms the way we live, work and travel. Advances in technology, energy, healthcare and infrastructure mean engineers will continue to play a vital role in all our lives, so it’s more important than ever that we inspire young people and their parents to take a closer look at the opportunities that this creative, innovative profession could offer them. Any young people inspired to explore a career in engineering are encouraged to visit the Year of Engineering website which has further information.’

Spaghetti Junction in numbers is the interchange of the M6, A38, A38 (M) connecting Birmingham and the M6.  Work started to build the road in 1968.  It took four years to build and is subject to regular maintenance programmes many of which take place underneath the road.  Some of the columns elevating the structure reach some 80ft.  Spaghetti Junction continues to hold international acclaim having formed the backdrop for filming for Ready Player One with some scenes filmed underneath the structure.  The towering concrete columns, some reaching to 80 feet high, formed the ideal backdrop to the film, which was in cinemas earlier this year.  For the filming, special templates featuring graffiti were stuck to the concrete structures and various props added into the set, including cars and tyres, with a ‘camp’ constructed for the new film. The film crew took considerable effort to protect the structure and ensure nothing was damaged during filming.