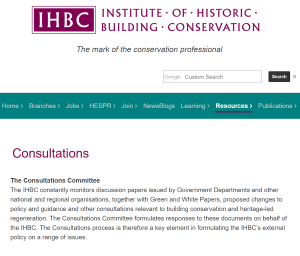 In its response to the revised National Planning Policy Framework (NPPF) the IHBC has urged government to call time on ‘substantial harm’ and ‘less than substantial harm’; to develop policies for setting, and to celebrate the differences between heritage types.

The IHBC has submitted its response on the consultation from the Ministry of Housing, Communities and Local Government on the revised National Planning Policy Framework (NPPF).