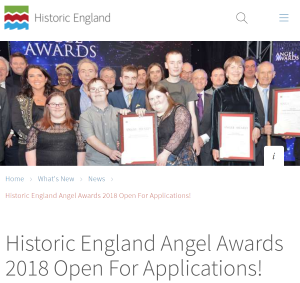 Historic England Angel Awards, started by Andrew Lloyd Webber, are open for applications and this year, as Wales joins England, Scotland and Northern Ireland to hold its own Angel awards this year, an overall winner will be chosen from the winners of the Angel Awards held across the UK.

Andrew Lloyd Webber, who founded the Historic England Angel Awards in 2011, said: ‘I applaud everyone who enters the Angel Awards and showcases the marvellous work they are doing to rescue and sustain our heritage. I am particularly pleased that Wales is involved this year which means the Angel Awards are running for the first time right across the UK’.  Andrew Lloyd Webber continued: ‘The Angel Awards shine a light on the special individuals and groups who tackle difficult historic buildings and sites at risk and inspire others to get involved. I am thrilled that at the London ceremony we will be presenting a special award to the overall winner from all the Angel Award categories in England, Northern Ireland, Scotland and Wales. I urge everyone to come forward and send in their applications.’

Duncan Wilson, Chief Executive of Historic England said: ‘These awards celebrate the many thousands of volunteers and organisations around England who take on challenging rescue projects. Those who look after our spectacular historic environment and go above and beyond the call of duty deserve proper recognition.’

Duncan Wilson continued: ‘The historic buildings and places all around us that tell the stories of who we are can play a big part in the lives of communities. Many of these precious places need years of repair and conservation to achieve once again their former glory. I encourage everyone with a passion for caring for their local heritage to enter these awards, and with the new categories for 2018, I’m looking forward to hearing about exciting new heritage rescues.’

By entering you’ll be in with a chance of having a film made about your heritage project and attending the red carpet Awards ceremony in London in late November.

Claire Slattery, Calderdale Council’s Arts & Heritage Manager who was last year’s ‘Overall Winner’ and winner of the ‘Award for Best Rescue of a Historic Building’ for the restoration of Grade I listed the Piece Hall said: ‘The incredible Piece Hall transformation has blown people away and is putting Halifax on the world map as a heritage and cultural destination. The conserved building has received record footfall of over 1.5 million since reopening last August.  Thanks to The Piece Hall and other developments in Halifax, the town is being compared to major cities in Europe. It’s giving people a new sense of pride, hope and aspiration as it once again becomes the heart of the local community.’

Claire Slattery continued: ‘Winning two Angel Awards was a wonderful achievement and everything we could have dreamed of. The Awards are truly remarkable as they shine a light on the people dedicated to bringing heritage to life. We are very grateful to Historic England and Andrew Lloyd Webber for highlighting the best heritage projects in the country.’

Nigel Ford who won an Angel Award in 2017 for ‘Best Rescue, Recording or Interpretation of a Historic Place’ for his work recovering and restoring Norfolk’s milestones said: ‘Entering the Angel Awards last year has had a big impact on raising the profile of my Norfolk milestone work. It was great to feature in the media and share my passion so widely, inspiring others to help repair these important milestones across Norfolk.’